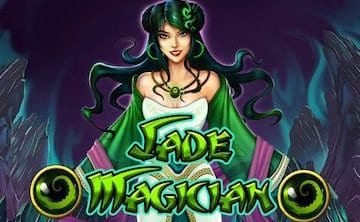 Jade Magician is an exciting magic-themed slots game that every gamer should play at least once. The magic symbols used in this game give it a much different appearance than that of other slot machines, and the very simple gameplay means you can jump right in without difficulty. If you want to make sure you have the most fun possible while playing Jade Magician, you need to learn a bit about this slot machine, including how you can activate the bonus features to maximize your jackpot winnings.

Jade Magician, a slot machine from provider Play’n Go, features 15 paylines and five reels. Depending on how the lines are arranged, you can activate multiple paylines while playing Jade Magician. Be aware, however, that winning combinations can start on any of the first three wheels.

Most of the symbols in this game take the form of animals. Jade Magician also features the standard Wild and Scatter Symbols.

The Second Chance bonus in this game gives you the opportunity to land the third Scatter Symbol and win a big prize. When you activate this feature, four Jade Elements will appear on your screen, and you will need to pick one. The third Scatter Symbol is hidden under one of these four Elements, and the other three either contain an X mark that will end this feature or instant coins.

Although there is no free spin round in the Jade Magician game, it is possible to earn free spins by landing Jade Magician Scatter Symbols on reels one, three, and/or five. When you hit these symbols, you can win either one or two additional spins, depending on the circumstances. In fact, on the bonus reels, you might be able to win as many as 50 free spins.

One of the most exciting features of this slot machine is your ability to land a variety of symbols that can help boost your earnings significantly. In addition to the previously mentioned Jade Magician Scatter Symbol, there are certain symbols that can substitute for other symbols on the reels, making it easier for you to find winning matches.

The 2x symbol, for instance, serves as the game’s Wild icon. You will only find this symbol on reel three. You can use the 2x symbol to complete a one-of-a-kind winning combination, as it can be used in place of the game’s other symbols. On top of helping you complete a winning combination, this symbol can double your earnings, making it one of the most advantageous symbols in Jade Magician.

If you like the game Jade Magician Slot, SevenJackpots also recommend the following games for you: