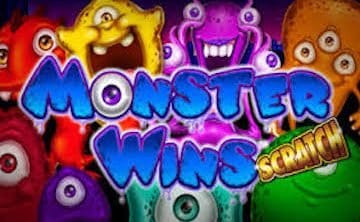 Meet a cast of kooky cartoon monsters in the Monster Wins Scratch game from NYX Interactive. This playful game was inspired by NYX Interactive's earlier Monster Wins slot game. A handy Play Slot button in the top right of the screen makes trying the slot game easy. Monster Wins Scratch is a simple scratch game featuring a 4x4 playing grid decorated with a colourful collection of creatures. Monsters are normally the stuff of nightmares, but these creatures' big smiles and googly eyes let you know they mean no harm. The playing grid is set against an otherworldly blue and purple landscape, suggesting these monsters come from a planet other than our own.

Match three or four of the same symbols, and you’ll win its corresponding prize. You can win more than one prize on the same scratch card. Just like with real scratch cards, some cards don’t win while others provide generous payouts.

There is no fixed or progressive jackpot as you might see on a slot machine game.

As a scratch game, Monster Wins Scratch doesn’t have free spins like slots usually do. However, the bonus feature is the scratch game equivalent. The five free games you receive could be every bit as lucrative as any slot machine free spins feature.

You’ll love the colourful winning symbols you reveal with every click of the Monster Wins Scratch game.

The game’s eight monsters all have their own looks. They become more sophisticated as their values increase. The lowest valued monster looks like a blue blob with a single eye. Another one-eyed monster is red, with two legs but no arms. He’s outranked by a green one-eyed monster with two arms and legs. A happy yellow one-eyed monster with an enormous grin comes next. The next ranked monster also has one eye. His white tummy stands out against his blue skin.

Next, come the monsters with two or more eyes. A two-eyed red monster with spines down his back waves hello. A three-eyed orange monster with an enormous head comes next. Then comes a crazy pink monster, who holds his four eyeballs in his tentacles. The final and most generous monster is all eyes – five of them to be precise – inside a blue square.

The bonus symbols round out the winning symbols on the Monster Wins Scratch game.

If you like the game Monster Wins Scratch Slot, SevenJackpots also recommend the following games for you: