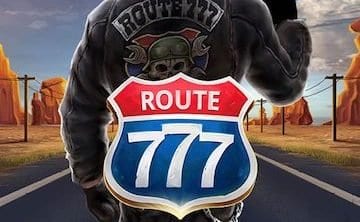 Imagine driving through the desert on Route 66 in the United States. You're almost out of gas, so you pull into the next run-down gas station you come across and notice that the only signs of life seem to be the rattlesnakes and scorpions that inhabit the area. You're running low on money, so your only options are to either try to steal what you need or risk getting into a brawl with the locals inside. The stakes are high and you must rely on your wits to survive.

That’s exactly the scene that Route 777 by Swedish gaming provider Elk Studios sets in this online slot machine. Route 777 is a simple, three by three slot game that does an excellent job at drawing you into the story and making you feel like a rough and tumble outlaw.

Route 777 is a bit light on bonus features, which isn’t always a bad thing. In place of a large number of side activities, the game provides you with an automatic bet optimizer, which, when used properly, can help to maximize potential winnings. There is one bonus feature worth noting, though. More about that below.

Route 777’s version of free spins is referred to as Fortune Wheel. When this feature is triggered, every symbol that lands on the reels will be a 7 of varying colors. Each color has a different value associated with it, but every 7 is considered a winning symbol in this mode, with the most valuable being worth 100,000 coins. The mode will continue to spin until you either land three identical 7 symbols or a red stop sign appears on the reel. Regardless of how long the mode lasts, you’ll stand to walk away with a pretty impressive jackpot.

If you’ve played other classic slots before, there’s nothing new here in terms of winning symbols. Route 777 doesn’t do much in the way of innovating gameplay, which only adds to the game’s overall level of accessibility. You’ll find all of the symbols you’re used to seeing in other slot games here, so there’s no need to worry about trying to learn a whole new set of symbols and their associated winning values. If you’ve played classic slots before, you really know everything you need to know about playing Route 777, making it that much easier to jump right in, enjoy the action, and start spinning your way toward your own personal jackpot.

It is worth noting that Route 777 doesn’t include anything as novel as a progressive jackpot either. Elk Studios’ main goal, it seems, was to craft a simple yet enjoyable slot machine that provides plenty in the way of entertainment and winning potential without straying too far from the classic slot gameplay that so many people love. If you’re looking for a game that makes you feel like you’re participating in something a bit bigger than what’s going on in the slot reels without taking away from the classic gameplay you love, Route 777 is the game for you.

If you like the game Route 777, SevenJackpots also recommend the following games for you: