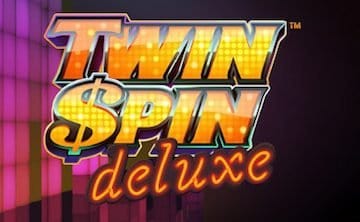 The Twin Spin Deluxe slotmachine game by NetEnt, a well-known provider of virtual casino games, made a splash on the gaming scene when it was released and introduced the concept of twin wheels to players. The game mechanic works by cloning two reels when they stop as opposed to lines and progressive play. There also exists the potential for multiple reels to get cloned at the same time, increasing the chances of a win. All this gameplay has been ported to the mobile version and brings along the exciting graphic design for which the original version is known.

Twin Spin Deluxe Mobile offers hours of straightforward game play. There’s little visual distraction from the reels and the reel board is clean and simple in design. The excitement builds when the reels spin and the game lights up. Get a cluster of matching symbols and the board goes dark while the matching symbols are highlighted by a flashing light behind them.

Twin Spin doesn’t offer bonuses of any kind. Playing this slot machine is a win/lose proposition. You either win or you lose after each press of the spin button. Each spin of the reels starts with twin reels that start and end the spin with the same symbols. If the other reels line up with the same symbols for a total of nine contiguous symbols, you have won the spin. There are no further bonuses for matching up nine or more symbols. The more symbols that match in one cluster, the more money gets paid out. It is possible to win up to 100,000 coins in one spin if the reels generate enough matching symbols when the spin ends.

As previously mentioned, the game is a straightforward win/lose style of gameplay. There is no mechanism in the form of a symbol or a line to generate the correct layout of symbols to get a free spin. Twin Spin Deluxe Mobile relies on the head start given to players in the form of the twin reels for increased potential of winning. NetEnt has created a slot machine that has more in common with the one-armed wonders of yesteryear as opposed to a virtual machine that can take advantage of modern technology and a lack of physical presence.

There are no winning symbols in the game. Instead, nine symbols need to connect together when the reels stop. The game symbols are made up of jack, king, queen, ace, bell, cherries, bar, and diamonds. The matching reels change every time you press the spin button. There’s always the potential for multiple reels to match with the remaining wheels resulting in random symbols that may or may not match. Getting multiple matching reels is a random event and can’t be predicted. The game has no build-up that signals more than two reels are going to match exactly. DonÇt forget to check out other NetEnt games such as Starburst, Hall of Gods and Finn and the Swirly Spin.

If you like the game Twin Spin Deluxe Mobile Slot, SevenJackpots also recommend the following games for you: