Key Findings of Our Study

This research piece aims to illustrate how socio-economic factors determine which states and cities in India have adopted online gaming as a mainstream form of real-money online entertainment. An analysis of SevenJackpots’ data reveals:

Which Indian States Stand Out for their Online Gambling Culture?

Historically, gambling in India has always been popular. Land-based casinos are past their peak and have become less relevant in today’s digital economy. Go-to destinations like Goa, Sikkim, and Daman have limited local players from entering, especially their youth.

On the contrary, online gambling gives easy access to many users with disposable income and interest in real-money gaming. Offshore gaming platforms expand the market but, more importantly, make it possible for industry experts to analyze a wider player pool, with its preferences, demographics, and gaming behavior.

With its huge population, India has quickly grown into one of the most exciting markets for online gambling. It is also increasingly urbanized – the city population is above 1/3 of its total, and more than 50 cities are above 1 million. More importantly, over 75% of all Indians are below 45, making young urban Indians a powerful driving force for the real-money gaming market.

Our research team has elaborated the internal data extracted from SevenJackpots’ Google Analytics organic traffic over a period of six months. Most player visits and online casino registrations come from Maharashtra, followed by Telangana, somewhat further behind. 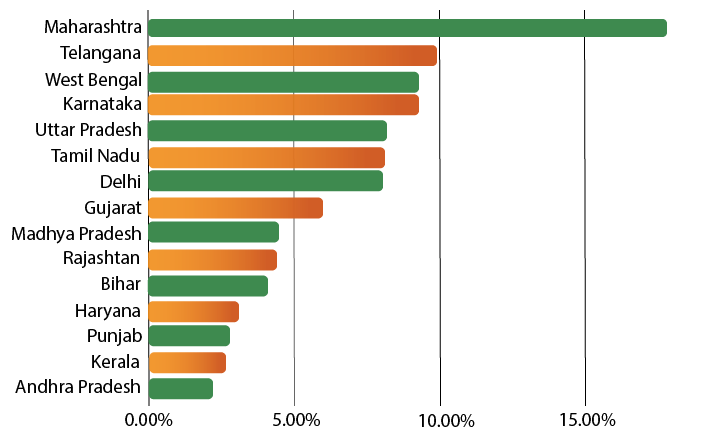 Both states are low-poverty and high-income. Maharashtra also has a huge population, with these two States bringing in more than 1/6 of all user visits. Mumbai and Pune residents give greater importance to online gambling as a use of their free time and disposable income.

They are followed by States which also have a sizable population that is mostly above poverty levels in statistical terms: West Bengal and Karnataka. Uttar Pradesh rates well in the relative volume of online gamblers (8%). However, despite boasting the country’s largest population, that only matches NCT Delhi’s numbers. 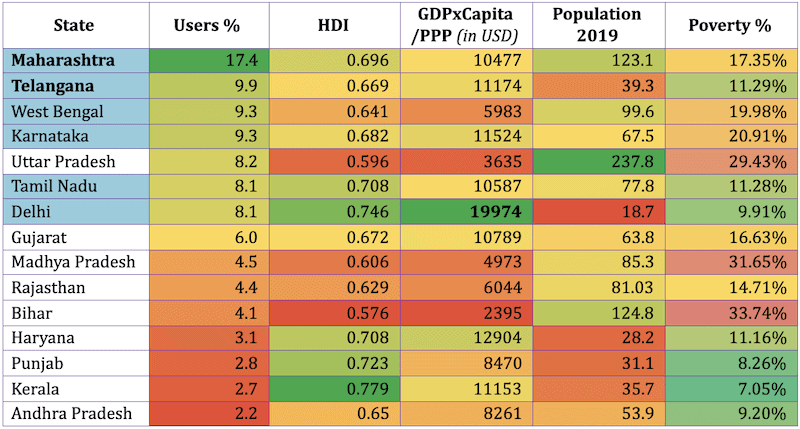 Put simply, the States which are home to the leading six Indian cities ensure the majority of online gambling, with 62.1% of all online casino customers. Their evolution into established online gambling communities offers some additional market perspectives: the new generation of real-money gamers has also started adopting a series of online gaming products which were somewhat foreign to Indian culture up until a few years ago.

These are also online gambling products boosted mostly by their popularity in metropolitan areas. Delhi and Mumbai are exemplary cases for the growth of slots; Hyderabad drives Telangana’s visibility in online roulette, while Bengaluru holds out as a player base for desi table games. 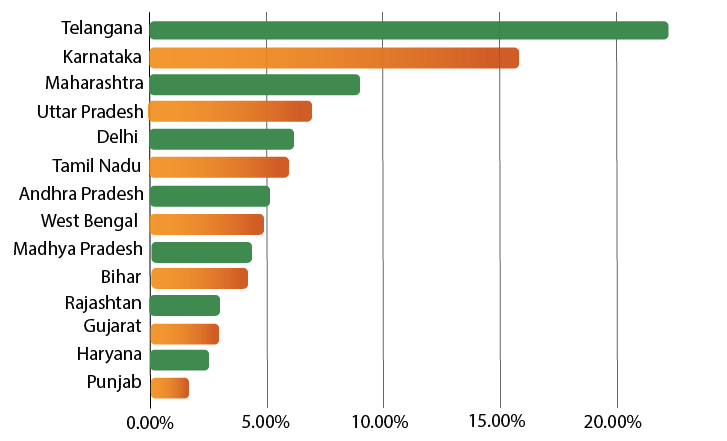 Sports betting is often considered seasonal in India but is always known to be a huge industry. While official channels report legal sports gambling figures under $2 billion, industry analysts and media outlets admit that total annual turnover is as high as $100 billion, with some estimates even quoting $150 billion.

As the Indian market develops towards its maturity, desi users wager increasingly on sports outside cricket and horse racing. Many have begun following popular European and American sports, and offshore sports betting operators manage to target them better.

We have broken down the aggregate traffic data rendered available by one of India’s leading sports betting review platforms. Traffic acquisition for registered users across States showed the following rankings. 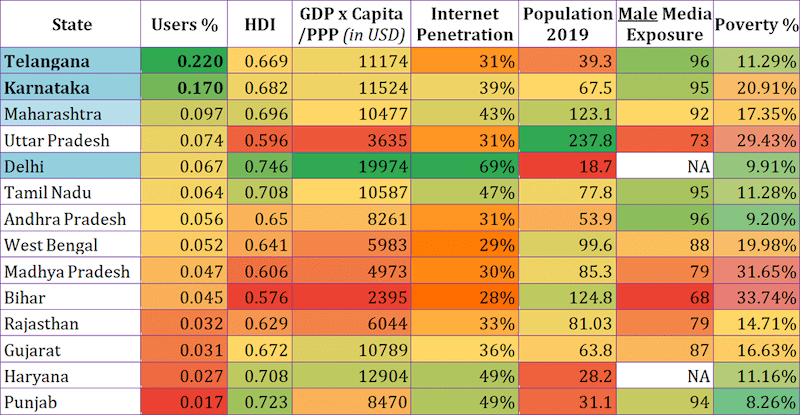 The major difference between online casinos is the rise of Telangana and Karnataka. The first one brings almost a quarter of all sports betting users, despite its size. Both states are home to some of India’s important tech hubs. Hyderabad and Bengaluru have young professionals who like innovation, digital products, and globalized services (e.g., crypto payments for gaming are on the rise).

Product preferences by State are also quite clear. Maharashtra is (also) dominated by cricket, while Telugu speakers – in Telangana and Andhra Pradesh – seem to have several sports passions: the ISL (football) and the Premier Badminton League are both quite popular.

As new market horizons open up, partnerships with European clubs keep the interest year-round. Kabaddi is even the official game of Telangana and Karnataka. Sports betting demand in the South far exceeds average Indian numbers.

Indian Government figures report 810 million mobile internet users in 2022 (second only to China) and are expected to pass 900 million by 2024. The ‘Digital in India’ industry report shows that internet penetration is also increasing. Expectedly, Delhi sits on top (with around 70%), followed by Kerala. These two States are even ahead of the technologically advanced South. Karnataka, a major IT hub, reports only 42 %.

Access is mostly 4G, and smartphones remain the dominant devices. Cheap and easy to use, they are the choice of 97% of all internet subscribers. Some of the world’s cheapest data packages also help market expansion.

How do Economic and Demographic Differences Affect Online Gambling?

Today, India’s leading urban areas have access to top-level healthcare, entertainment, and sports that are second to none. Despite persisting inequalities, metropolitan areas have superior services, technological infrastructure, and inevitably consumerist culture.

The richest Indian cities stand out in online gambling because of their middle class, which is reported as nearly 350 million. This influential user group can afford to consume online entertainment and game more and more often than others in the Union.

The shares of internet users across India, according to Statista, show certain (known) gaps between rural and urban realities: 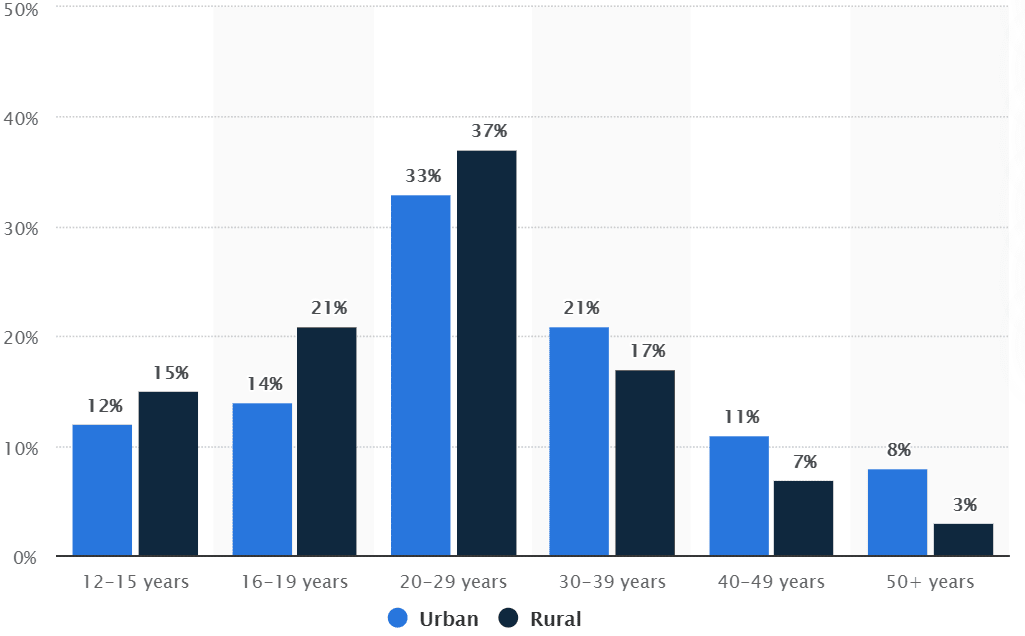 However, the above numbers show that the digital divide on a national scale is not such a big issue at this point. Rural Indian internet users are approximately equal to urban ones (in total numbers) and maintain a strong annual growth of around 18%. Admittedly, many are still stuck with 3G and some even with 2G, but this only confirms the unexpressed potential of the market.

If anything, there are still far more male internet users in the country than female users. This digital gender gap is only more pronounced in rural hinterlands compared to urban metros.

In addition, we know that state-by-state differences inevitably affect consumer purchasing power and, consequently, online entertainment access. The below table shows the Net Domestic Product, State by State (in INR): 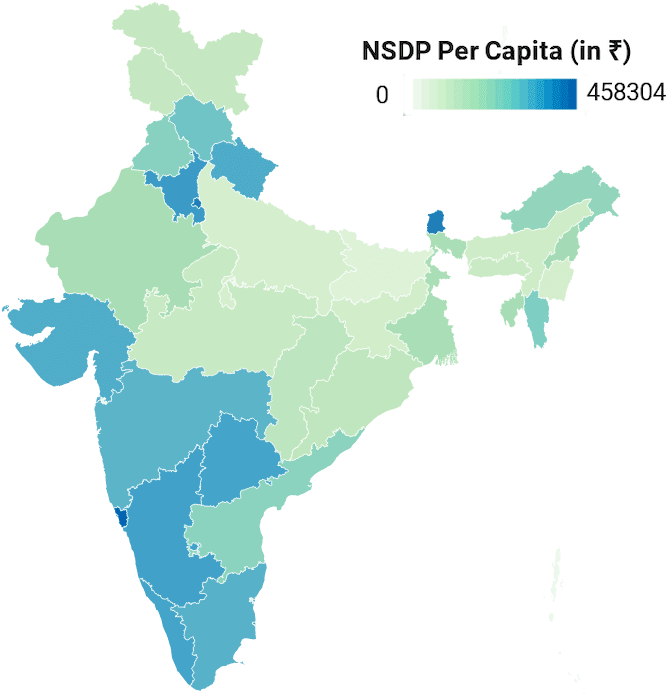 This spatial distribution shows that the States of Goa, Sikkim, Delhi, Haryana, Karnataka, Telangana, Kerala, Uttarakhand, Gujarat, Tamil Nadu, and Maharashtra all have an annual output above INR 200,000 (~EUR 2300) per capita.

UN reports (2020) also show that Andhra Pradesh and Sikkim improved and many States remain stable – Himachal Pradesh, Meghalaya, Telangana, and Maharashtra. The last two are also large enough to rank well in online gambling, while Meghalaya has passed its Gambling Regulation of Gaming Act in late 2021.

State levels of the SDG index also emphasize how much aspects like life expectancy, education, and income levels really matter in achieving market maturity. Kerala tops the state list, followed by Himachal Pradesh and Tamil Nadu. The Union Territories of Chandigarh and Delhi are also well above the rest. Among other states, Andhra Pradesh, Goa, Karnataka, Sikkim, Maharashtra, and Telangana perform better than the Indian average. Consequently, the larger ones also report a good online gambling presence.

Exposure to major media also counts. The Government ranks States by media exposure where the top spots go to the likes of Delhi, Kerala, Punjab, Tamil Nadu, Goa, Andhra Pradesh, Telangana, Karnataka, and Maharashtra. It is easy to spot the link between mass-media “intake” and the propensity to gamble.

There are additional drivers of online gaming growth, naturally. Player preference and gambling culture cannot be altered overnight, but quick technological evolution and generational dynamics do their part.

Ultimately, the aggregate effect of these factors has a considerable influence on Indian consumption trends. Players’ inherent gambling tastes and traditional convictions always add up and – together with the efficiency and accessibility of online entertainment and media – help shape contemporary consumption means.

This translates into a healthy online casino market with higher player expectations and demands. The young and tech-hungry Indian players, more than others, lead the way by defining the updated player profile. They drive consumption volumes in big cities and even smaller rural communities. In the end, offshore gaming operators are forced to consider these realities and offer more original content localization.

Integrating our data with industry reports, we have concluded that the larger and more developed an Indian metropolis is, the more visible and influential it is in the online gambling scene.

The Top 6 urban centers – Mumbai, Delhi, Kolkata, Chennai, Bangalore, and Hyderabad – are well above the rest, but others are starting to catch up. Ahmedabad and Surat, to name a couple, help Gujarat gain some industry exposure (for a total of 6% in our case); the leading six ensure the most online gambling traction and represent almost two-thirds of all active online casino customers evaluated through our proprietary resources.

The post-Covid reality has contributed to creating large and active gamer communities that see value in online gaming and socialize through it. As a result, we now see an online gambling culture that is particularly well pronounced in metropolitan areas.

We expect these urban centers to become even more influential in creating online gaming demand.