Lucky Bets or Acts of God? How Superstition and Religion Affect Daily Life in India History and Religion Say Who We Are Today
Looking for Luck beyond Religion
Does Everyone Believe in Lucky Symbols?
What Does the Future Hold in Store?

Desi culture is often described as expressive, with colorful symbols and intense rituals. Beneath all contexts, this is all based on a complex system of beliefs and traditions that go beyond State, religious or ethnic differences.

A study into the rich heritage of icons, customs, and superstitions illustrates the importance of actively pursuing one’s luck and prosperity. In other words, fortune and abundance come to those who believe in them.

History and Religion Say Who We Are Today

The stories of India’s past are full of legends and religious beliefs. Yet, they also carry over many practical traditions, sometimes with vague origins but always with a reason to exist to this day.

Bharat’s “unity in diversity” lies in being able to identify with many of its common traditions and beliefs that blur state, ethnic, and caste boundaries. Some symbols have an actual religious background; others are simply linked to common habits or irrational beliefs. Indisputably, however, religion and superstition are strong bonding elements for the entire Subcontinent.

The pursuit of fortune and wellbeing is an essential part of one’s life path. Often, we tend to seek divine intervention, honoring the Gods for being able to grant us wealth, luck, and otherworldly or spiritual abundance.

Lakshmi remains one of the most important deities associated with most human pursuits (Dharma, Artha, Kama, and Moksha). Known by over 70 names, she is worshiped for her unlimited ability to bless people with luck, power, and even beauty. She is everywhere in India, surrounded by traditional symbols like a red lotus, a shower of gold, or elephants (Gajalakshmi).

Her eight manifestations (Ashta Lakshmi) are also the Eight sources of Wealth. The Mother Goddess has influence over our positive attitude, inspiring immaterial wellbeing and qualities like strength, courage, determination, and hope.

Ganesha is also worshipped across the nation for his influence on people’s luck. He is easily recognized by his elephant head and big belly, the son of Shiva and Parvati, is the master of ceremonies invoked at pujas and weddings, granting wisdom, success, and fortune. Buddhists and Jains also worship Ganesha in the country. 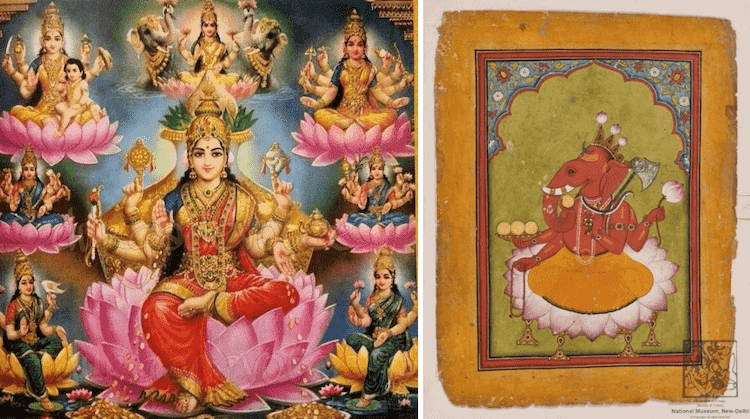 Ashta Lakshmi and Ganesha are seen almost everywhere in India.

Indians put an astounding variety of icons and amulets on display. Again, many come from religious backgrounds. Such is the case of Ashta Mangala and its eight signs of fortune – shell, knot, fish, lotus, parasol, vase, chakra, and victory banner. These symbolic attributes help Gods with their teachings to mortals and stand for spiritual qualities.

Today, these religious signs are mainly found in Hinduism, Buddhism, and Jainism, but are also used increasingly as decorations in common (secular) culture. This has been the case of ॐ – from an essence of mind, spirit, and body; it has become a lucky charm for many, an amulet or a pendant.

The Swastika, from a sign of wellbeing and prosperity, has been recognized as a fortunate design throughout Asia. And while it suffered its nazi adoption almost a century ago, it has also been used as a fashion statement or a lucky talisman.

Looking for Luck beyond Religion

The pursuit of happiness leads people to try different ideas to get some extra help. Some objects (and behaviors) are thought to be fortunate and blessed; others are avoided for no apparent reason.

Vastu Shastra, for example, is used widely for interior and exterior design, more than Feng Shui. Spatial arrangements influence the layout of homes, gardens, towns, shops, and businesses. Those who observe Vaastu principles invite growth, peace, and happiness in their place.

Surveys confirm that Vastu Shastra is just as popular as lucky charms in workplaces and households. If anything, these beliefs and symbols add up to improve the environment.

Similarly, people carry black chirmi beads or rudraksha necklaces on them, in their pockets or purses. These good luck charms combine mythology and personal belief in fortune and prosperity. They are thought to repel the evil eye and negative energy, as well as any money problems.

Astrology and Numerology Have Immense Following

For a nation with a very high literacy rate, India has surprising levels of faith in bizarre traditions and pure superstitions. Yantras are a great example of inexplicable origins, yet these occult diagrams are used to ask for the gods’ help or simply reach out to benevolent spirits. Their supernatural powers are said to be based on astrology and be capable of bringing luck, health, and financial prosperity. 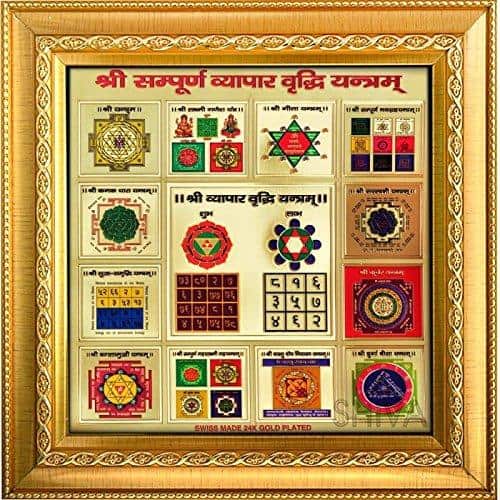 Hindus also have their favorite numbers, preferring odds over evens. Seven and Eight, however, as especially auspicious, meaning success and prosperity. Numbers sequences like 786 and 108 also stand out as lucky and even sacred (in almost any religion in the Union). 108 is particularly important – considered a link to Dharma, the honorific of gurus, the number of completeness, a multiple of 9, and the proper number of beads on a prayer string.

Jewelry and gemstones are also carefully selected, with astrologers going over horoscopes and recommending compatible and fortunate gems to get desired effects.

Fresh fruit is not only an altar gift for the gods; it is also a vehicle of positive energy. Whenever not available, people put up paintings or fruit decorations. Peaches symbolize immortality but also money and abundance. Pomegranates help with fertility issues. And while the North draws positive energy from apples, the South seeks prosperity and abundance from pineapples and oranges.

In this context, money attracting plants is no wonder. Many bring “positive vibes” into a household or an office – from Holy Basil, which everyone probably has in their home, to the twisted Money Tree or the evergreen Chinese Money plant.

Some need to be placed in particular corners (according to Vaastu or Feng Shui), like the Baby Jade plant set near the entrance of businesses to usher in wealth and prosperity. Others are simply too widespread, like the Lucky bamboo, which brings luck and abundance worldwide.

India’s superstitious nature shares some ideas with other cultures, even Western, like the luck of horseshoes or the jinx of black cats and broken mirrors. Desis, however, have their own peculiar beliefs that are second to none!

From eating a spoon of curd and sugar before going someplace important to avoiding sweeping after dark (not to chase luck away), fortune is actively sought. When a pigeon or a crow poops on you, you should probably run to buy a lottery ticket as luck is sure to come your way. When an eye twitches, money is coming your way, or you’re likely to meet love – although the left eye is auspicious for females and the right for males.

Business owners hang green chili and lemons outside so Alakshmi (goddess of misfortune) can stay out, while those who want to avoid bad luck never shave on Tuesdays, wash their hair on Thursdays, cut it on Saturdays or trim their nails on Tuesdays and Saturdays.

Does Everyone Believe in Lucky Symbols?

Although women were found slightly more likely to indulge in superstition (80% to 68% in men), surveys reveal that hundreds of companies in cities big and small had their offices full of good luck charms. Bangalore and New Delhi were top of the list, representing the nation’s melting pots of beliefs and customs.

Even where castes are more visible in labor and social life, people worship Lakshmi together and have the same festivals, even when honoring a different aspect of luck and wellbeing.

Devotion and superstition have withstood social evolution, digitization, and economic developments. They are not in conflict with education or modern lifestyles and are just as popular across Bharat as they are among desi communities living abroad. 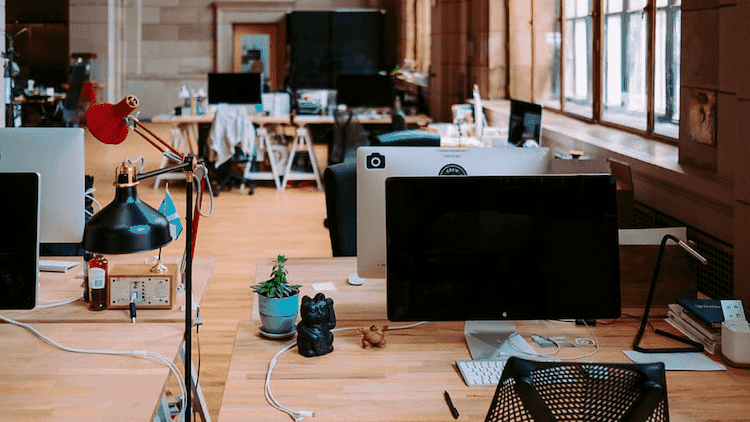 Holidays are prime examples of such symbols and rituals. Diwali, as the Festival of Lights, is among the most important social occasions. The height of Lakshmi celebrations coincides with the tradition of gambling with family members and friends.

On Gaja Lakshmi Puja, during the harvest festival, card games are also cited as particularly popular to challenge one’s luck and stay awake through Full Moon.

What Does the Future Hold in Store?

India’s rich heritage has made a multitude of religious and superstitious beliefs acceptable. Seeking divine protection and supernatural help is normal, with palm reading, numerology, astrology, and various prophecies as widespread as they are readily available.

Globalization has increased the demand for quick fixes and easy solutions. Smartphones and social media may easily turn superstitions and spiritual notions into viral events. Yet, many still rely on traditional religion and “proven” personal talismans.

There is a sense of pride in being able to accommodate so many beliefs and customs, festivals, and cultural habits. A healthy desire to control one’s life path makes Indians pursue their own selection of mystic symbols and fortunate beliefs.

It is not so much of a gaming competition as a conviction that luck and abundance should be actively and properly pursued. This mindset is likely to evolve but not change in its foundations, as desi customs, beliefs, and daily habits will continue to be guided by the pursuit of divine support and fortunate mysticism.