What our expert thinks

“NetEnt’s most popular slot of all time is the Starburst slot. I like that it pays both ways, but the max payout of 500x is low compared to many other slots.”

How to play Starburst slot

Starburst is played over five rows, three reels, and ten paylines. What’s good to know about Starburst paylines is that they pay both ways. In other words, land at least three matching symbols from left to right or from right to left, and you have yourself a win!

The bets range from 0.10 to 100, and the ten paylines are fixed, which means that you’ll always play with all of them active, no matter the amount you bet.

“Auto Play” can be used to play a selected number of rounds automatically, while “Max Bet” will play a spin on the highest bet level, at the current coin value.

There are a total of eight Starburst symbols. From highest to lowest paying, you’ve got a BAR symbol, a seven, a yellow gem, a green gem, an orange gem, a blue gem, and a purple gem.

Five BAR symbols will pay 25x your stake on a payline, but since that stretches across all five reels, they’ll pay twice, resulting in a 50x your bet in wins.

The eighth symbol of the game is the unique Starburst Wild. It comes in the shape of a colorful star, can land anywhere on reels 2, 3, and 4, and replaces all other symbols in the game. 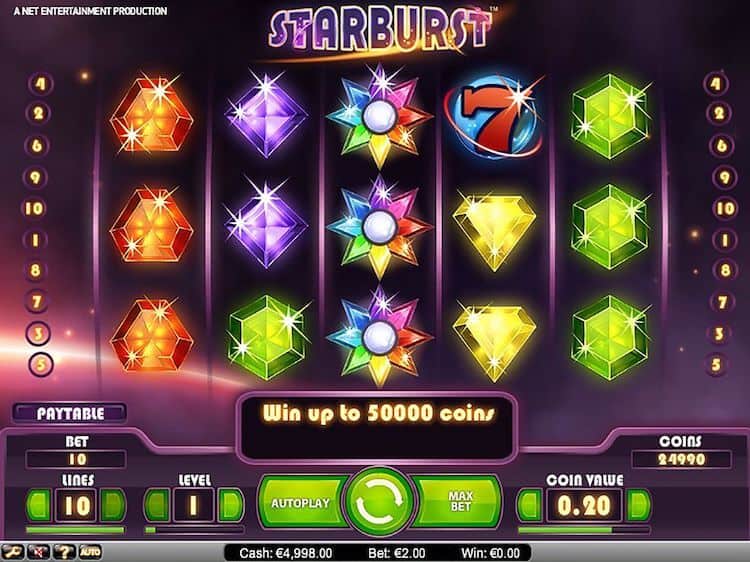 There are no Starburst free spins; instead, this video slot makes use of the special wild and its respin feature.

Any Starburst wild that lands on these reels will expand to cover the whole reel and trigger a respin. Should another Starburst Wild land, it will trigger yet another respin.

Up to three respins can trigger, and if BAR symbols land on reels 1 and 5, it will result in a win of 500x your bet!

Starburst bursts flawlessly across any mobile device, thanks to NetEnt’s “Touch” version of the game. In other words, Starburst Touch works on any iOS or Android phone and is playable in both landscape and portrait mode.

Starburst continues to be a staple slot game in many Indian players’ repertoire. It’s double direction paylines make you keep your eyes out for symbols across all reels, and when that Starburst Wild lands, you’ll hold your breath for the respins to bring luck and wins your way!

If you like the game Starburst, SevenJackpots also recommends the following games for you: