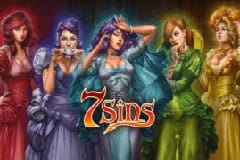 7 Sins comes with simple rules and plenty of chances to win, determined by the combinations of adjacent symbols and your starting bet. With 7 Sins, the more you bet, the more you can win.

The traditional card symbols (hearts, clubs, spades, and diamonds), which come up often and award up to 35 credits. The famous seven deadly sins (gluttony, lust, sloth, greed, wrath, envy, and vanity), portrayed as seven different women and awarding between 100 and 250 credits for their longest combination. The bet size ranges between 0.1 and 100 credits per spin, making this slot machine perfect for low and high rollers alike.

Bonus rounds are triggered by the special Scatter symbols. Three Scatters pay double the total bet and give you seven Free Spins. During each Free Spin, all seven sins will appear one by one as expanded symbols on reel 3. With each spin, your win multiplier goes up from 1x to 7x.

Other symbols won’t score as much but offer consistent payouts.

The 7 Sins slot game is a simple and fun game. Though other slots might offer higher cash rewards, along with a progressive jackpot, 7 Sins is still an engaging and appealing game, due to its creative features.

If you like the game 7 Sins Slot, SevenJackpots also recommend the following games for you: