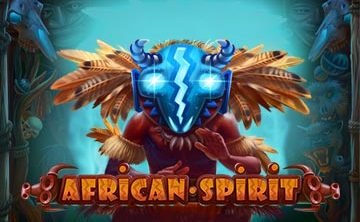 Get ready to embark on an adventure when you play African Spirit, an interactive slot game from popular provider Booongo Gaming. In this exciting game, a witch doctor has enchanted the reels, giving you more shots at winning the jackpot. It's a progressive slot game, which means as certain symbols appear, they can be destroyed on the screen, leaving space for other symbols to fall into place. This allows more chances for winning combinations and increases your odds of a bigger payout.

The imagery and graphics of this game are exciting and interactive, with a roaring fire on either side of the screen. As you start to spin the reels, you’ll find yourself inside a dark shack packed with traditional masks, heads, and animal skulls. Keep an eye on the prize as you continue to spin the reels and take home the big payout.

One of the bonus features built into African Spirit is the option to re-spin the reels. If the spear symbol pops up in the fifth reel with a wild symbol in any other reel, it will expand to fill the entire reel and trigger a re-spin bonus. You might also see scatter symbols appear at any time during the main game. Scatter symbols won’t appear during the re-spin bonus but can appear at any other time of play.

In order to trigger the free spin bonus, at least three of the scatter symbols must appear on active paylines. The number of free spins is chosen at random and will be between six and 10. You’ll start the bonus game by selecting one of the vases on the screen, which will give you one of several bonuses during your free spins.

African Spirit has a variety of colourful and eye-catching symbols. The roaring cheetah symbol is wild and substitutes for all symbols except the spear and scatter bonus. You’ll spot the wild symbol on reels two through five. The spear symbol activates a re-spin bonus when it appears with a wild symbol in one of the rows. You’ll only see the spear on the fifth reel.

The symbol offering the highest payout is the red mask, which pays 100 times your original bet if five appear on active paylines. For three symbols, the payout is four times the best, while four symbols offer a 20-time payout. The gold mask is another winning symbol, paying up to 50 times your bet.

Get acquainted with the culture of ancient African tribes as you play this exciting slot machine game. It’s one of the most popular slots among those who are fascinated by African culture.

If you like the game African Spirit Slot, SevenJackpots also recommend the following games for you: