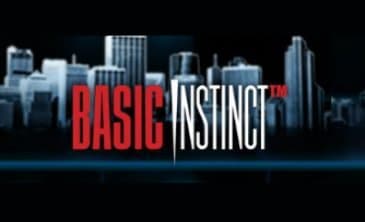 Basic Instinct was created by iSoftBet, a global online gaming software provider. The slot machines game is based on the 1992 film thriller. The Basic Instinct slot game is rather entertaining, especially since symbols of several characters from the movie make an appearance. The 5-reel game offers 243 ways to win.

The setting is the famous club scene from the movie, and you’ll notice a Sharon Stone movie poster in the background. There are San Francisco images and other notable details from the movie that make up the game’s winning symbols.

If you aren’t familiar with the movie’s plot, “Basic Instinct” is about the relationship between Catherine Tramell, played by Sharon Stone, and Nick Curran, played by Michael Douglas. The combination of graphic violence and sex led to some controversy when the movie was released.

There is a progressive jackpot you can win over time when different people are playing the same game or other ones that are connected. The jackpot keeps growing until someone wins it.

There are four wild symbols on the reels The first is the regular wild, which is represented as the cityscape. The last three are stacked wilds and feature Sharon Stone from different scenes in the movie.

If three wilds appear stacked, there will be a special feature. If a stacked wild is partially visible on the reel, it will transform into a standard wild, the San Francisco cityscape.

If you have Wild Bonus symbols that appear stacked on the central reel, you’ll start a mini bonus game. Bits of the interrogation scene play out while you select prizes from the available 12 boxes.

The wild drop features Stone in a red dress, and when it’s fully visible on three positions, it triggers the special drop feature. Then, on each subsequent spin, the wild symbols drop down a position while the remaining reels respin and ensure you have some wild action on each of the special-drop spins.

There is a free spins wild symbol that features Sharon Stone looking over her shoulder against a green background. If you get Wild Free Spins that appear stacked on the central reel, you’ll trigger a random number of free spins, which can be retriggered. You can earn up to 38 free spins with this. These substitute for all other symbols, except for other stacked wilds.

If a symbol appears on at least three consecutive reels starting from the left, you are going to win. One of the best symbols is the ice pick, and you can get up to 1,500 coins if you luck out to get five in a row. The police badge pays out 500 coins if you get them all aligned in a row. Other symbols include a pistol, a black Lotus Esprit, handcuffs, and playing card symbols from Ace to 10.

You have an opportunity for an 80 times multiplier if you get the Bonus Wild symbol, which is represented by Sharon Stone in her famous leg-crossing scene against a blue backdrop.

If you like the game Basic Instinct Slot, SevenJackpots also recommend the following games for you: