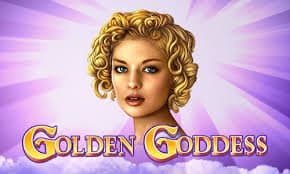 IGT's Golden Goddess slot game takes you back to another age and draws you into the tales of the gods. You'll find yourself in ancient Greece with your gold framed reels set against a stunning garden background, complete with looming mountains and a romantic sunset. The peaceful background music in this game is enough to whisk you away to another world as you serenely spin through the game. Symbols in the Golden Goddess slot game include the Golden Goddess herself, a man, an elegant horse, and a dove. You'll also find card symbols 10 through Ace, decorated with beautiful flowers.

Spin through the Golden Goddess slot one click at a time or use auto spin to sit back and let the game carry you away. This is a simple slot with a charming aesthetic to enjoy.

The Golden Goddess game icon is wild and substitutes for all symbols except the rose scatter symbols. The Super Stacks feature is the most distinctive element of the game. For each spin, a new symbol is selected for this feature. This can be any symbol except the scatter rose. This symbol will appear stacked throughout that spin, increasing your chances for a win. Anywhere stacked symbols appear on the reels, they will automatically transform into the chosen symbol for that round. Naturally, you’ll want to watch for stacks of the highest paying symbols for some impressive wins.

The charming rose serves as your scatter symbol in Golden Goddess. It appears only on reels 2, 3, and 4. Land nine roses and you’ll enjoy seven free spins. Since each reel features only three symbols, you need a full garden of roses down all three center reels to trigger this feature.

When you trigger the free spins bonus game, you’re prompted to pick a rose from the reels before you. This will reveal your lucky symbol for the free spins feature. This can be the Golden Goddess, man, horse, or dove. Card symbols are not among the stacked options for this bonus. The symbol that you reveal will substitute for all stacked symbols throughout your free spins. You cannot retrigger additional free spins during your bonus round, as the rose does not appear during free spins.

Aces are high among the card symbols. Land five aces on the reels for 15 coins. Four aces are worth 10 coins, and three aces are worth five coins. The king, queen, jack, and 10 are each worth one less than the previous suit, leaving the 10 with a value of just one coin for three symbols in a payline.

If you like the game Golden Goddess Slot, SevenJackpots also recommend the following games for you: