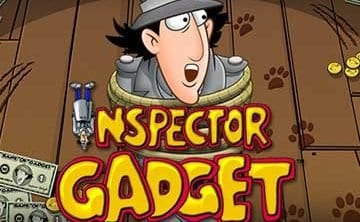 Perhaps you've seen the movie or enjoyed the cartoons as a child. Now you can revisit the clumsy inspector, Penny, and the rest of the gang with the Inspector Gadget video slot game from provider Blueprint Gaming. The gadgets are incorporated in an entertaining way that keeps you spinning just to see what's next and hoping for a jackpot.

Inspector Gadget is a video slot with five reels and 50 paylines. It has no progressive jackpot. The background is the city streets. You can set your bet between 0.20 and 200. “Spin” lets the reels turn one time. If that’s too much manual interaction with the machine to suit your style, choose “Autoplay” to let the reels turn on their own for a set number of times.

If a M.A.D. Bonus symbol shows up, you’ve found the Scatter. Three or more of these take you into one of five bonus games:

During a spin in the bonus mode, Gadget can get one of five modifiers:

Free Spins are tied into the game’s bonus features mentioned above.

The lowest paying symbols you’ll see are the classic J and Q, followed by K and A. Next are a pair of handcuffs and a safe. A Top Secret document and the Gadget Mobile come in second for most valuable, and the stacked Inspector Gadget symbols are the highest paying symbols. You must land at least three of a kind on one of the paylines to win.

The Bomb is the Wild symbol. It can substitute for anything except the Scatter. Wilds can win on their own or in combination with other symbols.

If you like the game Inspector Gadget Slot, SevenJackpots also recommend the following games for you: