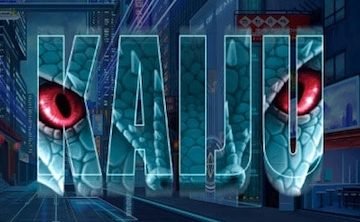 Kaiju is a rather interesting online slot machine that's set in a world that seems to be a strange mix of elements from science fiction franchises such as Ghost in the Machine and Pacific Rim. This slot game, by gaming provider Elk Studios, is played on a three by five play reel set against a futuristic city background. You can see a still screen of a news report in the background that suggests the world is under attack by the large creatures known as Kaiju that the game is named after.

Gameplay is fast-paced and exciting, with visuals and sound effects that further reinforce the near future science fiction setting the game wants to draw you into.

There are two main bonus features to be aware of in this slot game. The first is fairly straightforward. When you land a winning combination that runs from the bottom to the top of the play area, a Wild symbol automatically appears at the top of the winning line, adding to the overall winnings for that particular spin.

More notably, there is a Bonus symbol in the game, represented by an android character named HA-42. If she appears three times on a single spin, the game’s free spin minigame will be launched. That’s where things begin to get really interesting.

When HA-42 lands on the reels three times in a single spin, the game’s free spin mode is activated. This is a feature called the Kaiju Battle, and it pits HA-42 in a one-on-one battle with a giant Kaiju that is attacking the city. Gameplay is pretty straightforward in this mode as, at its heart, it is a free spin mode, so there’s not much for you to do but sit back and watch things unfold. The mode begins with seven free spins and, as with normal spins, a winning combination that runs from bottom to top will earn you a wild symbol.

Here’s where things get different: every wild symbol you earn gets you another free spin while expanding the play reel to the spot the wild appeared in. The goal is to fill up the entire play area, thus defeating the Kaiju. This will continue until either the monster has been defeated or you run out of free spins. Either way, you’re going to walk away from the fight with a nice jackpot.

Classic-winning symbols have all been replaced by theme-appropriate symbols in Kaiju. In order from least to most expensive, the winning symbols are:

The game does provide a handy paytable chart if you ever need to reference specific symbol values.

Kaiju is a beautifully rendered game, and Elk Studios has really outdone themselves in terms of visuals and sound effects. The game looks much more complicated than it is though and even the exciting Kaiju Battles are relatively easy to work through. This is one slot game you must check out for yourself. DonÇt forget to check out other fun Elk slots such as Ho Ho Tower, Route 777 and Lukes Five.

If you like the game Kaiju Slot, SevenJackpots also recommend the following games for you: