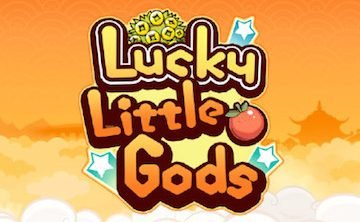 Featuring a Manga cartoon-like design with vibrant colours and graphics, the Lucky Little Gods Mobile slot machine features five reels that give you 243 ways to win. Created by provider Microgaming, this game involves Chinese mythology and its symbols pertaining to good fortune.

Chinese folklore says the God of Fortune will give prosperity and fortune. The reels sit in clouds, and you can view temples and pagodas in the distance. The main character includes a young girl who holds a staff, and she spends her time chasing a little boy holding a sack of gold coins.

This mobile slot game has several bonus features. The randomly triggered Little Gods bonus happens after any non-winning spin. A fish-riding opponent chases the boy character across the bottom of the screen, causing the boy to spill coins from his bag. As a result, you get an instant prize ranging from four to 40 times the triggering bet.

Another bonus feature is the Treasure Pot Scatter bonus. If you have the gold pot of coins land on the third reel, you can press on it to release the treasure. This gives you an instant prize ranging from 20 to 100 times the stake.

A third bonus is the Golden Tree Scatter bonus. This takes place in the base game whenever you get the money tree symbol on the first or fifth reel. The tree shakes and coins begin to fall, giving you up to 40-times the triggering bet.

Free spins are perhaps the most beneficial feature of the Lucky Little Gods Mobile game. To get free spins, land three, four, or five firecracker scatters anywhere on the reels. These firecrackers can give you eight, nine, or 10 free spins. During these free games, all of reels one and five come stacked with wilds. In addition, every scatter symbol that comes up during the free games will give you one extra free spin.

Although it doesn’t offer progressive jackpots like other slots such as Cleopatra Mega Jackpots and Paws of Fury offers a generous non-progressive jackpot of 1,500 coins. Instead of using playing-card values, this mobile slot machine has Chinese words and symbols as its low-paying symbols. The higher-paying symbols include the Gods of Fortune and their apprentices. The game’s logo serves as its wild, and it can replace any standard symbol in the game. However, it’s just a basic wild and will not multiply your winnings.

The amount you win depends upon the bet you made before spinning the reels. Click on the coin stack to set your bet, which can range between 0.30 and 30, and your bet value can go up to 10. Select the spin to set the reels in motion or use autoplay to turn the reels without assistance for a specific number of spins. You need between two and five matching symbols to create a winning combination. You only need two matches with the lower-valued symbols, while other higher-paying symbols need three matches.

If you like the game Lucky Little Gods Slot, SevenJackpots also recommend the following games for you: