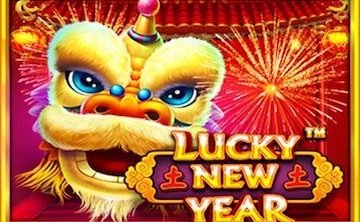 If you have the itch to hit up the slot machines, there's no need to wait any longer. You can go ahead and scratch that itch with the Pragmatic Play software-powered Lucky New Year slots. Not only do these slots pump up your adrenaline and excitement, but you can adjust your coin size per line. And being that there are 25 pay-lines, you'll find yourself loving this slot for days on end. Let's check out all that the Lucky New Year slot has to offer.

This video-powered progressive slot machine game has five reels, and as mentioned above, 25 pay-lines. Plentiful in cheerful and colorful designs, it features an exciting way to test your chances and win money. Before you pull the reel, though, you’ll want to set your betting range, which can easily be achieved by using the “+/-” buttons that allow you to up and down your coin size from 0.01 to 0.50. Don’t forget that you’ll be setting bet ranges for each pay line.

One of the most notable features about the Lucky New Year slot machine is that it allows you to play on “Autoplay,” which enables you to set a predetermined number of times you want the reels to turn without being interrupted. After choosing this number, you simply hit the “Play” button and your reels go into motion. It’s all fun and games from this point forward. You’ll be mesmerized as the reels turn and the symbols start popping up. Hopefully, you’re a Lucky New Year winner. If you are, you can cash out or use your earnings to keep playing. It’s all up to you.

There are lots of Indian online casinos that feature the Lucky New Year game, many of which give you free spins in exchange for your email address.

There is also a Golden Tree symbol that serves as the Scatter on this game, appearing only on the one, three, and five reels. If you happen to land three of the Golden Tree symbols, this triggers an awesome bonus feature which gives you five free spins. That’s right. Five spins for free. To top it off, during the bonus spins, the two, three, and four reels spin together and if you land three more symbols during these spins, you’ll get three more free spins.

One of the first symbols to catch your attention on the Lucky New Year slot machine is the Wild Symbol, the Gilded Dog. Except for the Scatter and Money symbols, the Gilded Dog will serve as a substitute for all other symbols.

In addition to the Gilded Dog and Golden Tree, there is also a Chinese Lantern money symbol, which can be found on all reels. With each spin you give the game, this symbol takes on a random value that is based on a predefined set. Sometimes, it takes on the value of the Minor or Major jackpots. If you happen to land six Lanterns, you’ll find yourself enjoying the Money Respin feature, which starts only after all of your line winnings have been paid out.

If you like the game Lucky New Year Slot, SevenJackpots also recommend the following games for you: