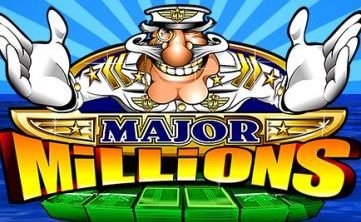 If you love the idea of taking your online slot machine action on the road with you and you can't get enough of the kind of high action that many modern mobile games offer, you're going to love the fact that popular gaming provider Microgaming has managed to combine both of those things in their highly-addictive game, Major Millions Mobile.

This military-inspired mobile slot game is played on a three by five slot reel that offers simple yet addictive gameplay. Don’t let the low-fidelity graphics fool you, though. Major Millions Mobile is a popular game among many slots lovers for a reason.

Despite the apparent lack of graphics quality in Major Millions Mobile, which is actually intentional, this slot game’s real draw is its attractive progressive jackpot. In fact, the jackpot in Major Millions Mobile starts quite a bit higher than those in other online casino slots, making this fact alone an attractive bonus for many players. What’s even better is that the jackpot has the potential to increase every time you spin the reels, adding up to some really great winnings if you’re lucky enough to land the jackpot.

All you have to do to win the current jackpot is to land a total of five jackpot symbols, represented by the Major himself, on a single spin. For that to be possible, however, you’ll need to have every single bet line active, which could potentially cost you a lot. That’s the nature of the jackpot in Major Millions Mobile. You can win a lot of money, but you have to be willing to risk a lot for your chance to get it.

One way that Major Millions Mobile breaks from traditional slots is the fact that it doesn’t include a free spin mode. At least not in the way you’re likely used to seeing. Rather than a free spin mode that continues to rack up winnings for you until some condition is met, the Scatter symbols in Major Millions Mobile act as explosive devices. When a Scatter symbol lands on the reels, it will explode, taking out nearby symbols and awarding you with winnings for every winning symbol that is destroyed.

Ultimately, this has the same effect on potential winnings as a traditional free spin mode. The real bonus here is the fact that you don’t have to sit and wait for free spins to run their cycle. Your earnings happen almost instantly whenever a Scatter symbol appears.

Major Millions Mobile is a great entry point for anybody who loves slot games and wants to take the action on the road with them. Microgaming is known for crafting excellent slots and this game is no exception.

If you like the game Major Millions Mobile Slot, SevenJackpots also recommend the following games for you: