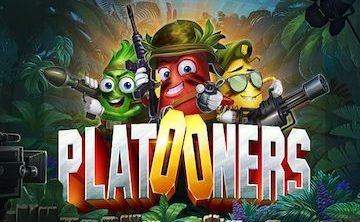 Platooners is a fun, colourful slot that plunges you into a jungle movie set. Make sure you have the sound on for the animated intro video! This five-reel slot from provider Elk Studios has an impressive 178 paylines. The game isn't progressive, but with so many ways to win and a large maximum coin size, you can walk away with an enormous jackpot. The maximum possible prize awards 250,000 coins. Players can configure the coin size from 0.2 to 100. The wager plays across all paylines, and you can't change the coins per line amount. Each bet places 100 coins.

If you’ve played Elk Studios other slots, you’ll recognize the interface. Click the coin symbol in the bottom left corner to pull up the total bet menu. There, you can pick an amount to wager. This provider’s games also have the unique benefit of a strategy system. You can pick a tactic to automatically adjust your bet levels to adapt based on a percent of your balance, consecutive wins, a single loss, or another factor. The slotmachine has a theoretical return to player rate of 96.3 percent.

Platooners has a normal mode and a bonus mode. Whenever you get three snake symbols in one spin, you enter the Action Spins feature, which is also the game’s free spin system. Watch for these perks to deal extra damage to the snake during complimentary rounds:

Action Spins awards 15 free rounds. You’ll also see at least one of the colourful platooners come into play during each round. Watch for these extra bonuses as the characters get into the action:

– When four bonus symbols land, two platooners attack the snake each round.

– When five bonus symbols land, all three platooners attack the snake each round.

– When the Rockets, Grenades, or Bullets bonus is triggered, the platooner does extra damage to the snake.

During this bonus feature, the platooners work together to attack and kill the snake. This earns coins. The platooners can level up twice by defeating the snake. Action Spins can’t be retriggered during the free spin rounds.

Platooners features winning symbols iconic of jungle warfare. The highest paying are dog tags, a rugged machete, binoculars, and a health kit. These award 1,000, 500, 200, and 150 coins, respectively, for a match of five in a payline. The game also has low-paying J, Q, K, and A symbols. These award 120 coins for five in a payline.

If you like the game Platooners Slot, SevenJackpots also recommend the following games for you: