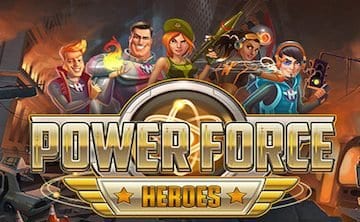 If you've ever dreamed of living the life of a comic book character, be sure to check out a slot machine game called Power Force Heroes. This theme of this game is that you're in charge of a superhero team that must save your city from a rival squad of dastardly villains. The bright colors and superhero theme of this game, as well as its low rate of volatility, should make it irresistible to gamers.

Push Gaming is the provider behind Power Force Heroes. Five different heroes are on your team in this slot game, and every hero has an opposing villain against which it will provide a multiplier. For instance, when Strong Hero is matched up against Strong Villain, you can receive an award up to 100 times the line bet.

One can get a winning combination of this game by matching up three, four, or five of the same symbols, and you may also be able to win a progressive jackpot, depending on the combination.

Power Force Heroes is a slot machine that is very focused on bonus features. In addition to the traditional wild or joker symbol that can help you score a winning combination, several other bonuses should interest every gamer.

For example, mystery symbols can appear at any time on one of the five reels in this game. Landing on these symbols can make it easier for you to hit several winning combinations at the same time.

You can find another Power Force Heroes in the large symbol blocks that can appear on the reels. When one of these blocks appears, it functions the same way as if you had landed multiple individual mystery symbols. During the game, bonus symbols can appear at random, and when they do, you’ll have the ability to activate the Heroes Take Over Bonus game.

While playing Power Force Heroes, you will have the opportunity to access free spins in multiple ways. In the Heroes Take Over bonus game, there are two different free spin rounds. With the regular free spin round, certain letter symbols will be replaced by Hero symbols. This free round will continue until you are only landing Hero symbols.

You can also be awarded a super free-spin round. During this free spin round, only Hero symbols will be used, and there will also always be a big block symbol on the wheels.

The winning symbols you should look for in Power Force Heroes are the gold or silver jackpot symbols. These symbols represent two of the available progressive jackpots, and by matching three of either symbol in a row, you’ll hit the super win. While this will obviously give you the biggest earnings, this game is more focused on frequent, smaller jackpots, which you can win by hitting combinations of different Hero symbols.

If you like the game Power Force Heroes, SevenJackpots also recommend the following games for you: