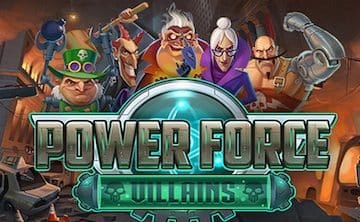 Push Gaming is a very popular slot machine provider, and one of its most interesting games is Power Force Villains. The complement game to Power Force Heroes, Power Force Villains puts you in the shoes of a supervillain team bent on world domination. This game features a variety of memorable characters and some truly rewarding jackpots. Also, because the game is low-volatility, gamers will have a consistently enjoyable experience. Here are a few facts about the gameplay of Power Force Villains and some information about the bonus features and winning symbols that you will encounter while playing this slots game.

Power Force Villains features five reels and 25 paylines. The lowest bet you can make is 0.25 credits per spin, and the maximum bet is 100 credits per spin. You can easily alter the amount of your wager by using the command menu. If you’re interested in speeding up the gameplay, you can take advantage of the auto spin feature.

Five different villains are in the game (Clown, Fire, Gadget, Spy, and Strong), and you can easily win multiple small prizes in addition to the top jackpot. As in most slot machine games, your goal will be to match symbols, with certain combinations providing you a greater payout than others.

Power Force Villains provides players access to a variety of exciting bonus features that can add to the fun of the game. For example, like many slot games, mystery symbols will periodically appear on the wheels, and you can use these symbols to help you form a winning combination.

Another bonus of Power Force Villains is the frequent appearance of large 3×3 symbol blocks. These blocks will feature one of the game’s villains, and when one block appears, you will receive the same rewards you would have earned by landing several mystery block combinations.

Free spins in Power Force Villains are awarded during the Villains Take Over bonus game. This bonus game features both a traditional free spin round and a super free spin round, both of which are exciting ways to increase your chances for a payout.

The free spin round has a nice feature where some of the standard letter tiles such as J and Q are swapped out for Hero symbols, making it much likelier that you will be able to hit a winning combination. Your chances of winning will also be increased in the super free spin round, but instead of swapping letters for Hero symbols, the reels will always feature one of the 3×3 hero blocks.

The biggest jackpot you can win while playing Power Force Villains is 10X your line bet, and you can earn this jackpot by trying to land on the winning symbols. In this game, there are two types of winning symbols: silver and gold. Hitting combinations of three of these symbols will earn their respective jackpot. The two progressive jackpots in this game are known as Power and Force.

You can also win smaller prizes by matching up Hero symbols on the various reels of this game.

If you like the game Power Force Villains Slot, SevenJackpots also recommend the following games for you: