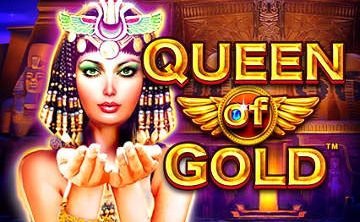 Cleopatra ruled Ancient Egypt with a strong hand, and the Queen of Gold Slot is inspired by her legendary beauty. The regal, ornate graphics on this slot machine call to mind her powerful persona. The background features the great pyramids of Egypt, which she presided over during her historic reign. Queen of Gold's five reels and 25 pay lines will capture your attention and offer you many ways to win. You can collect points through six progressive levels - each one more exciting than the last. You can earn these points by placing the golden ring on a cell and then landing the Cleopatra symbol on that spot. Each time Cleopatra lands in the golden ring, you receive one point. Collect 25 points to reach the next level!

This is one of several top-rated slots from provider Pragmatic Play. Players can adjust the coin size from 0.01 to 0.5 and the coins per line for each bet from 1 to 10. Queen of Gold has a jackpot, bonus features, free spins, and a theoretical return-to-player rate of 96.5 percent. If you can’t wait we have rated Indias biggest online casinos, in order to save time for you!

Play Queen of Gold for Free

Watch out for the joker! If you get a joker on reel six, you get instantly bumped up to the next level. Reel six is also the multiplier reel. One symbol is randomly picked on this reel after each spin during the base game. Your winnings can be multiplied by a maximum of 100 if you get into the Super Level, which is inside the Queen’s Chamber. The win multiplier applies to the total of every spin.

The blue pyramid is the game’s scatter symbol. If you land three or more on reels one, three, and five, you trigger the free spins feature. This gives you 10 free spins.

Players can trigger this feature an unlimited number of times, and it’s available during the main game and during free spins. You just need to land an additional three pyramids during the bonus feature to get more complementary rounds without placing another bet!

Queen of Gold has low-paying A, K, and Q symbols. These pay out 1.6, 1.2, and 0.8 times your wager, respectively, when you get five in a payline. The values are much lower if you only win with three or four of these symbols. Cleopatra pays the highest, awarding 8x your wager, followed by three other high-paying winning symbols featuring Egyptian gods and icons.

In addition to these winning symbols, Queen of Gold has wilds. Pharaoh may not be the most loved ancient Egyptian, but his people knew who he was and honored him. You will, too, since he’s the wild symbol. Look for him to appear on any reel and substitute for any symbol in the game, excluding the bonus pyramids.

To get the highest possible win in the game, you need to land five Cleopatra symbols and the 100x multiplier. This isn’t a progressive prize, but it’s still a huge win that pays out 800 times your wager.

If you like the game Queen of Gold, SevenJackpots also recommend the following games for you: