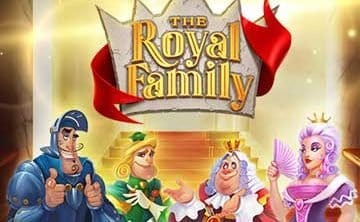 Yggdrasil is known for superior graphics and animated sequences, and they’re used to full effect here. There are random bonuses too, encouraging you to keep court with the Royals for a little longer.

The Royal Family slot doesn’t have fixed or progressive jackpot bonuses like other slots, including Yggdrasil’s own Empire Fortune. However, there are so many other great game features, you’ll hardly miss them. Reveal a royal chest on the last reel for a special card bonus game. Select one of the five cards for a coin win or free spins feature. During the free spins game, the chest’s cards deliver extra free spins and sticky wilds.

The wild jester is sticky during the free spins feature. The royal family members want to maximise your wins too, so they rotate after every spin. If you’re lucky, when they stop spinning, they’ll become sticky wilds, too. Special feature prizes appearing randomly on the reels supercharge your free games feature. Collect two prizes from the same reel for at least eight free spins with the relevant bonus. If you complete a reel pair at the same time, you’ll get two separate free spins features played one after the other.

Collect a sword on the first reel for a free spin feature with two extra spins, for a total of 10 free spins. The free spins feature will start with two sticky wilds. All wins are doubled during this special feature.

The royal family isn’t just the most esteemed people in the land. They’re also the highest ranked symbols on the slot reels. The king, queen, and jack are beloved by all the players in the online casino. Then there are the card suites: clubs, diamonds, spades, and hearts. The trophy scatters and jester wilds, which substitute for all but the scatters, complete the reels.

If you like the game Royal Family Slot, SevenJackpots also recommend the following games for you: