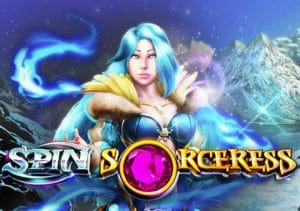 The Sorceress herself makes up the game board, which features three rows and three columns. While the design of this game is relatively simple, the magical noises and the mountain background will help to keep gamers engaged.

As you might expect from a scratch card machine, the gameplay of Scratch Spin Sorceress is simple to figure out. Your goal is to land three matching symbols anywhere on the board. You can either scratch off the symbols one at a time, or if you want to know right away if you have landed matching symbols, you can use the games reveal all feature. This game also has an Autoplay feature that will allow you to sit back and relax while the game does all the work.

One of the biggest differences between Scratch Spin Sorceress and other scratch card games is that you will have access to an exciting bonus feature as you enjoy playing this game. If you want to trigger the bonus game, you will need to match three book symbols. During the bonus game, any scratches that result in winning matches will be boosted by a 2x multiplier.

The bonus round and the free scratch feature in Scratch Spin Sorceress are one and the same. When you land the three book symbols mentioned in the previous section, the bonus game will begin, and you will receive 10 free scratches. Although this scratch game is not progressive, playing the regular game can earn you great winnings. In addition, using the multiplier in the bonus game is the best way to maximise your awards for this slot.

Like all scratch card games, there are certain symbols in Scratch Spin Sorceress that will help you improve your odds of winning. As mentioned, the book symbols are some of the best symbols to reveal, as they will activate the bonus game for you. There are also eight other symbols you may see in this game, all which can affect your total winnings during the game.

The Sorceress is the highest-paying symbol you could reveal, and if you are able to match three of these symbols, you can win 1,000 times your original bet. The wolf symbol is the other high-paying symbol in Scratch Spin Sorceress. Land three of these symbols and your bet will be multiplied by 100 times. The other symbols that can be revealed in this scratch card game include a crystal ball, a runestone, a floating orb, a crystal scepter, and a lotus flower.

If you like the game Scratch Spin Sorceress Slot, SevenJackpots also recommend the following games for you: