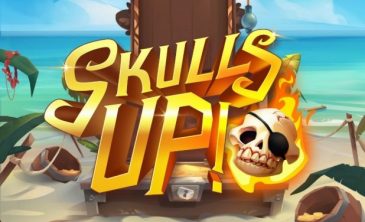 Skulls Up! by Quickspin

Channel your inner Sumbhajee Angria and become the Terror of the Arabian Sea in Quickspin’s Skulls Up! slot. A game with 243 ways to win, you can really plunder the seas in this slot machine. Thanks to re-spins and free spins, you may be in for a pirate’s fortune.

Ahoy, matey! Ready to join a merry band of pirates and plunder the seas? The slot Skulls Up! by Quickspin is a perfectly pirate-y adventure set in a sea of riches. Play Skulls Up! for real money right now at any Indian online casino. If you’re lucky, you might end up as rich as Sumbhajee Angria himself.

How to win in Skulls Up!

How to win Skulls Up!?

The Skull Wild and Flaming Skull Wild can deliver amazing win combos and plenty of cash. You will truly plunder the Arabian seas when you land 3 chest scatters for 6 Flaming Free Spins.

Land 3 big chests on the reels to get to the free spins round in the Skulls Up! slot machine. You’ll get 6 of these initially. All open reel positions will remain open during this round. Land more Skull Wilds in free spins to expand the reels higher.

The higher your reels go, the bigger your chances to win. Grow a reel to its max height and you’ll get a couple more free games for each. This raises your chances to win and makes the Skulls Up! slot by Quickspin even more exciting.

A Bonus Fit for the Terror of the Arabian Sea

Although not a bonus game specifically, the Skulls Up! Re-Spins feature surely act like it. It is triggered by the Flaming Wilds. Once it starts, it’ll continue as long as there are Flaming Wilds on the reels. Any new wild opens up a new spot on the reels, increasing the ways to win.

You can win in 1,944 ways in the Skulls Up! slot online. That is if you expand the reels to the maximum height of 6. New Flaming Wilds on the reels are immune to being extinguished. Get several of these and you’ll be in for flaming hot prizes.

As a pirate slot itself, Skulls Up!’s video and audio shouldn’t be surprising. Quickspin’s trademark cartoonish graphics are all over it. You get cartoonish pirates on the reels and a pirate’s skull along with an eyepatch. It’s an undoubtedly pirate-y slot.

The sounds of the game definitely suit the theme. The nice and relaxed beach music in the background will surely get you in the mood for a cocktail. Whenever you’re close to the re-spins or a big win, the audio goes up indicating the big possibility to score.

Overall, the audio and graphics make it an obvious cartoonish pirate slot Indian players will surely fall in love with.

All symbols in the video slot Skulls Up! are visually distinguished. The paytable calls them low and high wins. These are card royals and there’s a total of 5. The ace pays the most – five of these gives you a 4x win. When it comes to the other symbols, they pay way more than that.

The high wins symbols are the ship’s crew. These pay a lot more. Land 6 No-Beard (captain) symbols and you’ll get a prize worth 20 times your stake. In comparison, Biggie the pirate pays 15x.

Wrench and Biscuit are the lowest figures on the deck. Five of these give you only a 5x win.

Summary of Skulls Up! slot machine

Thanks to the 243 ways to win and the special wilds, the slot Skulls Up! is a blast. If you’ve ever wanted to become the Terror of the Indian Seas, this is your chance. Plunder the seas with Biggie, No-Beard and the crew to earn big loot.

Play Skulls Up! for real money at any online casino that accepts Indian players. You will surely enjoy the sights and sounds of the Indian sea. Join the merry band of pirates and captain a pirate ship.

Wasn’t that what you dreamed of as a kid?