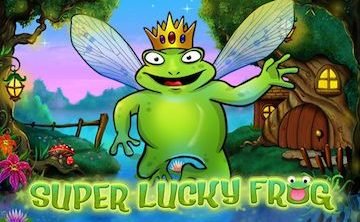 Enter a fantasy world of elves, fairies, and winged frog kings when you spin the reels on Super Lucky Frog, from popular gaming provider NetEnt. The forest fairy-tale theme helps set this classic five-reel, 25-payline slot game apart from the other slots in the online casino. Its classic design and simple features make gameplay easy for newcomers and seasoned slots enthusiasts alike.

Three or more successive Super Lucky Frog Bonus symbols, starting on the first reel, trigger the bonus game. This fun feature takes place near a treehouse, perhaps owned by the frog king himself, beside a lily pad-covered lake.

Spin the frog king’s Triple Jackpot wheel to reveal your prize. There are a wide variety of prizes on offer, from a lowly bet return to the larger jackpot prizes, known as Super, Lucky, and Froggy. These jackpot amounts are fixed rather than progressive, staying the same no matter how many other players play the game or how long the jackpot is unpaid. The jackpot amounts start at å50 for the Froggy Jackpot. The å500 jackpot is called Lucky, but the luckiest players qualify for the Super Jackpot instead, which stands at å5,000.

Three or more Fairy Scatter symbols trigger the free spins feature. Unlike the Super Lucky Frog Bonus, the scatters can appear on any reel and do not need to run consecutively.

You may win the Super Lucky Frog bonus game during the free spins feature. However, its value is not tripled as other free spin wins are.

Super Lucky Frog’s winning symbols are drawn in a playful cartoon style in the tradition of Japanese manga, with simple lines and wide, innocent eyes. The Super Lucky Frog Bonus and Fairy Scatter symbols are joined by a cast of mythical characters and woodland creatures.

The green elf symbols are wild, substituting for all but the Super Lucky Frog and Fairy symbols. These symbols have a winning value in their own right, so combining several near the start of a payline can be very lucrative.

You’ll also find mythical creatures like unicorns and griffins along with familiar forest folks like squirrels, snails, butterflies, and lady beetles. Red toadstools with white spots have a magical quality in keeping with the Super Lucky Frog slot’s fairy-tale feel.

If you like the game Super Lucky Frog Slot, SevenJackpots also recommend the following games for you: