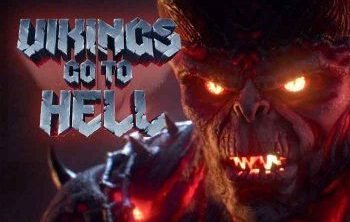 Vikings Go to Hell from provider Yggdrasil Gaming is the third Vikings slot machine game, following Vikings Go Wild and Vikings Go Berzerk. This slots game offers four rows, five reels, and 25 paylines for plenty of action. The game is optimised for desktop and mobile play, so it's easy to enjoy anywhere you want. Since the slot game has several detailed bonus features, you might want to play the free version first to make sure you feel comfortable with the gameplay.

Although Vikings Go to Hell doesn’t have a progressive jackpot like some other slot games, this game does have a variety of bonus features to enjoy. The first feature you’ll see is the Rage Collection. During this feature, you collect rage points by seeing wilds during a battle with a demon, the Lord of Chains, or Lucifer.

The points stay between playing sessions, so you won’t lose your progress. When you fill the rage meter for one of the Vikings, you win seven free spins, and that Viking enters Berzerk Mode, which means he or she will always win a demon battle.

The Lucifer Free Spin symbol does a lot more than just offer free spins. If you land on two Lucifer Free Spin symbols, you’ll trigger the Demon Fights feature. A demon fight will take place with any Viking symbols on the reels. If the Vikings win the fight, they turn into a wild and one rage point will get added to that Viking’s rage collection.

During Level Two, the Vikings fight Lucifer. Like Level One, three hits will defeat the demon. Your victory rewards include Wild Vikings and a x3 multiplier for all of your free spins.

The four Vikings make up the highest paying winning symbols in Vikings Go to Hell. The lower paying symbols include the sword, bow and arrows, axes, and hammer.

If you like the game Vikings Go to Hell Slot, SevenJackpots also recommend the following games for you: