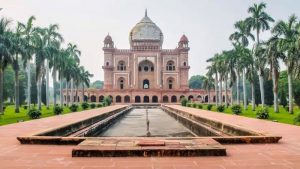 Residents of Delhi, the capital territory of India, have enjoyed different types of gambling throughout Indian history.

In Delhi, sultans and kings have been engaged in gambling, and today, ordinary players are looking for the excitement that real money gambling brings.

Delhi is one of the Indian states which have set up their own laws related to gambling within state borders.

This guide will explain how Delhi gambling laws work and how Delhi players can gamble online legally.

Table of Content
How to gamble from Delhi
Is gambling legal in Delhi?
The Gambling Laws of New Delhi
Delhi Public Gambling Act, 1955
Casino in New Delhi
New Delhi Gaming-Houses
Lottery in Delhi
Sports betting in Delhi
Horse racing in Delhi
Status on Rummy, Poker, Flush and other card games
To sum it up

How to gamble from Delhi

Gambling from Delhi is simple. Just pick one of the casinos listed at SevenJackpots.

The casino sites listed here are all based outside of India, which means that they are free from Indian gambling laws altogether!

The best foreign casinos are tailored to desi players, and to this day, there have been no prosecutions of players gambling on foreign casino sites in India.

Is gambling legal in Delhi?

All forms of gambling except horse racing is prohibited in Delhi as per the Delhi Public Gambling Act, 1955.

This means that if you are taking part in any type of gambling organized within Delhi’s borders, you are committing a crime.

However, as mentioned earlier, you can legally play at online casino sites located outside of India, such as Pure Casino, as they are excluded from India’s gambling laws.

The Gambling Laws of New Delhi

In Delhi, all gambling is regulated under the Delhi Public Gambling Act, 1955.

The main focus of the Delhi Public Gambling Act is to restrict underground casinos and organized gambling in so-called “gaming-houses”. Gambling in these places is done both online and offline.

What is unique about Delhi’s laws is that they completely disregard the difference between games of skill and games of chance.

According to the Delhi Public Gambling Act, there is no such thing as a “game of skill”.

As per the Delhi act, participating in gambling or even being present in a “gaming-house” in Delhi means that you are risking fines of up to ₹500.

Owning and running a “gaming-house” risks imprisonment of up to six months, and a fine of up to ₹1000.

These charges are doubled for each time a person is found guilty of them.

New Delhi is the capital of India, and also a huge hub for underground gambling. Secret “gaming-houses” are being set up in some of the cities’ many hotels or farmhouses, and players are invited there to play.

In recent years, New Delhi police have worked hard on raiding various establishments, arresting organizers, and punishing players, who come from all over India to play here.

The illegal “gaming-houses” are usually only available to members or on an invite-only basis. Big-spending players are given accommodation and travel in exchange for an entry fee to the house.

Once there, gambling is nowadays often done using online software and apps. Players are given login credentials and use cryptocurrency to fund their gambling to make funds harder to trace.

Although lotteries are insanely popular in India, they are illegal in Delhi.

That said, it is only offering lottery games that are considered illegal, you are still allowed to play, as long as you play on a lottery located outside of Delhi.

Thanks to the Lottery Regulations Act 1998, several Indian states offer local lotteries. You’re also able to play at global lotteries at one of the many lottery sites listed here.

Like other gambling forms, sports betting is seen as a game of chance and is, therefore, completely illegal to organize or participate in from within Delhi.

Thankfully for you, many online casino sites offer a sportsbook of their own where you can place bets on various sports.

Foreign casinos offer the latest and best odds, even on Indian games such as the IPL and Kabaddi.

Rather surprisingly, placing bets on horse racing is the one thing you can do locally and legally in Delhi!

Bets can be placed directly at the Delhi Race Club or from one of the off-site betting counters around New Delhi.

Just as with regular sports betting, you can also bet on horse races through a foreign gambling site.

Although the Delhi laws state that no gambling game can be based on skill, discussions around this are still ongoing.

However, as the debate continues, you’re still able to find poker and other card games at offshore casino sites.

Gambling in Delhi is only problematic if you are doing so from a local gaming-house.

The best online casino site in India is still a much easier, safer, and more trustworthy option.

We list only the very best desi gambling sites here at SevenJackpots, all available for you, whether you live in Delhi or elsewhere.