In India, you have plenty of MONOPOLY Live casinos to choose from. We have reviewed and ranked all the best Indian gambling sites and created a list of the top 3 MONOPOLY Live online casino sites.

In our reviews, we go through each and every part of the online casino, tally up the different points, and give it a total score from a five-star rating system.

Below you can find the sites with the highest ranking that offers this exciting live game show!

Casino Days is an Indian online casino that has it all. You can find a huge, frequently updated casino game catalog, and make easy deposits and quick withdrawals thanks to Paytm.

At Casino Days, you can, of course, play MONOPOLY Live, but also plenty of other live-streamed game shows, like Crazy Time Live or Deal or No Deal Live. Casino Days received the highest score in our review and is the best MONOPOLY Live casino in India.

Betway is another MONOPOLY Live casino available for Indian players. This international betting site offers not only world-class sports betting but a great live casino as well. You can find all the most exciting card games like Blackjack online, classic table games like online roulette, and a huge library of slot machines.

Playing real money MONOPOLY Live at Betway is easy thanks to their wide variety of payment providers, including Indian payment gateways like UPI.

If you are looking for a great Indian online casino with MONOPOLY Live, then Pure Win is a good match for you. At Pure Win casino, you can find all your favorite Indian card games like Andar Bahar and Teen Patti. The site is also available in four different Indian languages. Transactions to and from the site are smooth with PhonePe and Paytm.

Its MONOPOLY Live game can be found in the live casino section of the site, but Pure Win is more than just a live casino with MONOPOLY; you can play lots of other exciting live games as well.

How to play MONOPOLY Live

MONOPOLY Live is a Game Show type of game, and if you’ve ever played Dream Catcher, you’ve already got half of the game down.

But this is so much more than just a lucky wheel. In the MONOPOLY Live game, you’ll enjoy an additional 3D Bonus round shown in AR (Augmented Reality) on the game show floor.

To play the 3D Bonus game, you’ll have to place a bet on one or more of the bonus sections on the wheel; “2 Rolls”, and “4 Rolls.” if the wheel’s flapper stops on the bonus section you’ve betted on, you qualify for the next round!

Every player will see the bonus round as it plays out, but only those who had placed an active bet on either of the bonus sections will participate in it.

During the Bonus game, MR.MONOPOLY himself walks around a 3D MONOPOLY board and collects cash prizes for players. How many steps he’ll walk is determined by the roll of two dice.

Just like in the MONOPOLY board game, different sections of the board represent different features:

The live dealer in MONOPOLY Live is known as a Game Show Host and is the one who will lead you through your game experience.

The host will let you know when you can place bets and will also let you know how the game progresses, both during the wheel spin and bonus round. 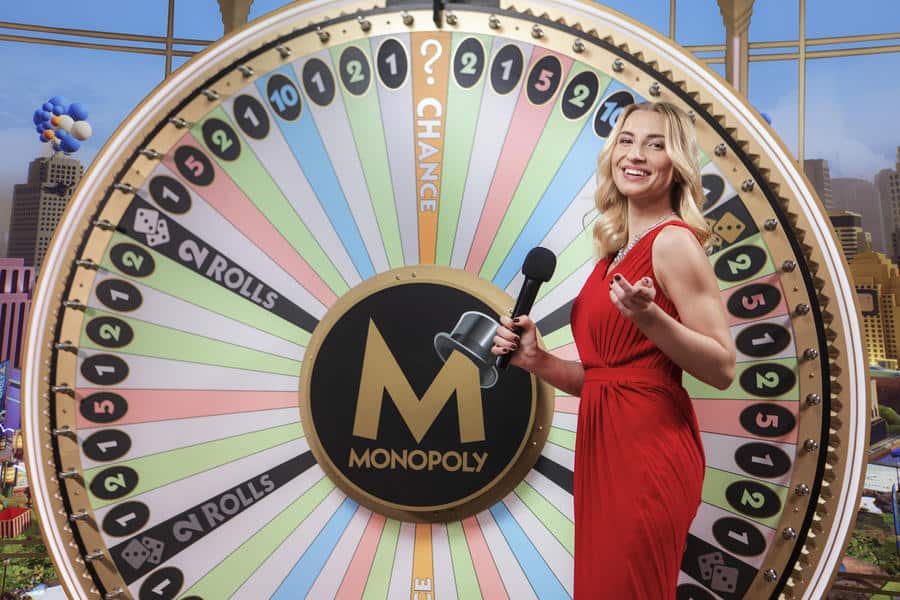 The MONOPOLY Live rules are simple and resemble those of Crazy Time as well in the sense that you’ll have to place a bet on the bonus round sections of the wheel for a chance to play the bonus round.

Make sure to place bets on the sections you wish to bet on, and then watch as the game unfolds. If you are placing identical bets on each game round, feel free to use the Autoplay feature.

A CHANCE segment on the wheel will pay a random cash prize, or a multiplier, while the Bonus feature pays up to the max ₹4,50,00,000.

MONOPOLY Live is developed in HTML5 for each unique device so that you’ll get the best possible gambling experience no matter if you are using a mobile or tablet device.

Desi players looking for exceptional live entertainment where you don’t have to learn complicated rules or play against a dealer will love MONOPOLY Live.

We believe that those fond of roulette online real money tables enjoys this game the most, while players who usually play games like Teen Patti real cash and online blackjack might rather look for a more inclusive game.

No matter what kind of gambler you are, we are sure that you’ll find MONOPOLY Live entertaining, so go check it out at one of our most popular Indian casino sites!