How to play Narcos slot

Narcos merges tradition with innovation by utilizing five reels and three rows in combination with a ways-to-win mechanic.

To land wins, simply land a matching symbol on at least three reels from left to right. Symbols can land on any of the three rows to make up a win; just aim for the same one to land on reels 1-3 or more, and you’re a winner!

Just like the life of the famous drug lord, expect medium to high volatility. Big wins can hit when you least expect them to!

In this online casino slot, symbols are true to the characters we meet in the TV-series but have been given a nice cartoonish look.

The police badge is the wild of the game and replaces all symbols except the scatter and locked up symbols.

Get ready for features as you step into this drug cartel!

The Walking Wild can happen at any time during the game. When this feature happens, the wild will stay on the reels and travel one step horizontally to the left with each new spin.

A Drive-By feature can trigger randomly and will transform some high-paying symbols on the reels into wilds.

The two main features of the Narcos slot game are the Locked up feature and Free Spins. 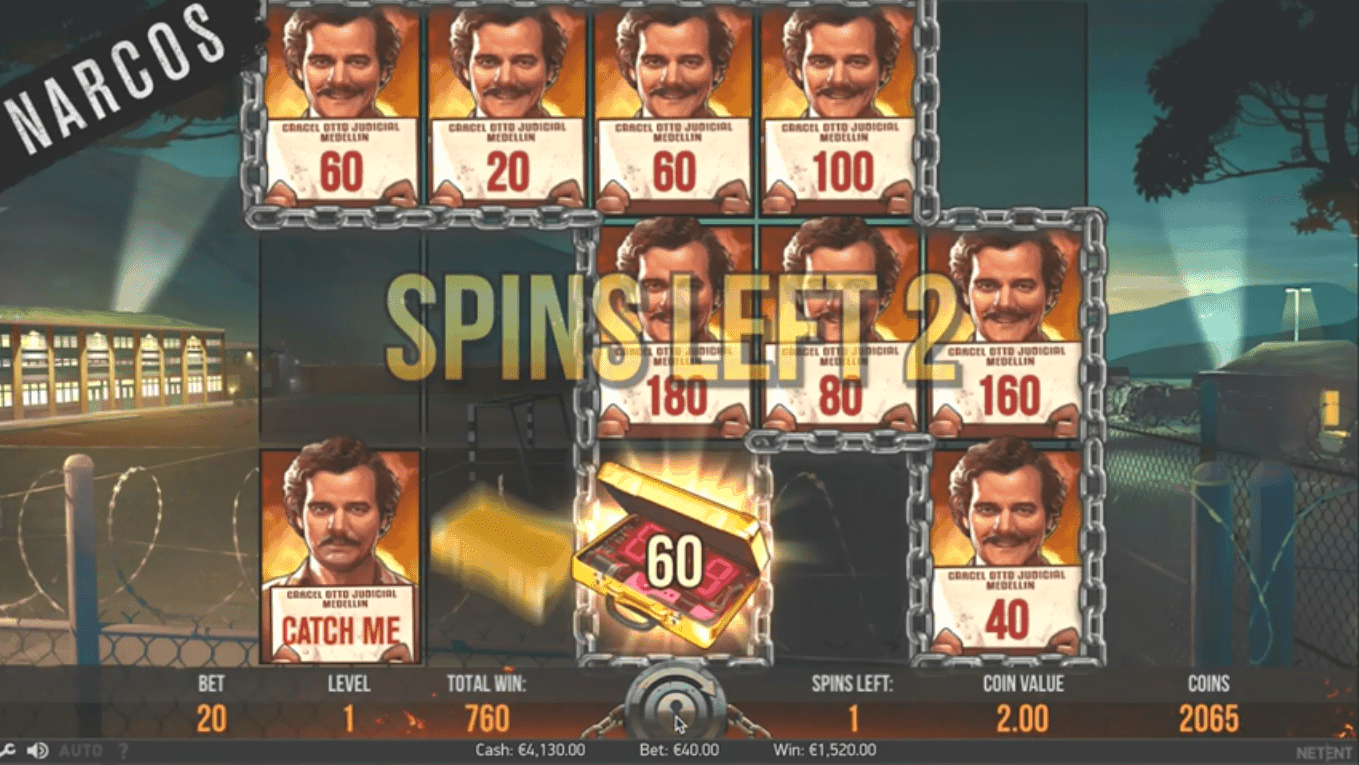 Three or more of the Locked Up symbols have to land on the same row to activate this feature. The symbols are moved together and receive a random coin value between 1 and 10x your bet.

If a symbol lands next to a winning cluster, an instant cash prize between 1-10x bet is awarded.

The unique Golden Locked Up symbol provides a special bonus feature when it connects to a winning cluster:

Land three scatter symbols to trigger 10 Free Spins. During this bonus feature, each spin has the chance of transforming one or more high-paying symbols into wilds.

If the reels still show Walking Wilds after all 10 free spins have been played, one extra free spin is triggered until there are no more Walking Wilds visible on the reels.

All of the action in this slot game is readily available to you through your smartphone or tablet. NetEnt Touch is used for the Narcos video slot, which means that it works flawlessly on most iOS and Android phones.

You’ll find the game readily available at real money casino sites in India, and you can play the game through a casino app and website browser alike.

Just so that we’re clear, drugs are bad! But that doesn’t have to stop you from enjoying this heart-racing slot!

If you like the game Narcos, SevenJackpots also recommend the following games for you: