Our primary research is based on aggregate data provided by PureWin’s online casino. Datasets include anonymous statistics of over 170 thousand registered players covering 14 months ending in December of 2021. The highlighted traction and adoption rates, as well as game preferences, are largely confirmed by Google Trends and third-party industry statistics.

The first thing our research paper team noticed is that desi players tend to enjoy more foreign games than expected. Many top-ranked casino games are simplified versions of casino classics like roulette, slots, or blackjack. Easy gameplay often means a quicker draw or a spin, even instant results.

Card games like online Blackjack, Baccarat, and Texas Hold’em are perfect examples – they attract the most players among the segment (together: 9% in operator turnover and 11.6% of the total player count). Speed Baccarat is the highest-rated card game among the top 30 titles.

More significantly, however, player activity indicates that online slots and roulette are now the top fan-picks across the Union when it comes to casino games for real money.

Online roulette tops most charts – both as a single title and a group of games. In the top 30 casino games by turnover, it generates a whopping 70.1%, business intelligence figures reveal. It also draws as much as 53% of the total money bet among the most popular games. Such market shares only decrease slightly when we extend the analysis to the top 100 games (by bet volumes).

Lightning Roulette leads the list by a sound margin. Its immense success sees it generate more than a quarter of the turnover in the top 30.

Quite importantly, most games in this leading group are played with a live dealer, except for slots. Most fan favorites are also quick-play versions, especially in the roulette category. Features classified as “lightning,” “speed,” “instant,” or “auto” draw the most crowds and online bets.

Our casino experts point out that the success of these games is not a coincidence. Online casino turnover is mostly directed to games with the highest returns to player (RTP), something roulette and slots are famous for.

This partially explains why online slots are the other emerging fan favorite. Out of 28 thousand registered players (opting for the top 30 games), slots account for 29% of game sessions. They are even more relevant in the top 100 by player count, with over 35.7%.

While roulette maintains the top spot, it practically levels with slots in terms of player count among the top 100 games (35.8%). These figures show the expanding player base for these genres, offering fresh visual content and, above all, dynamic gameplay.

Slots are cited as a prime example of a booming online casino niche that sees the most game titles produced every year. On Pure Win alone (which supplied the big data), there are reported active player sessions in over 2300 slot titles (out of 2640 total casino games). The astounding amount of game supply corresponds to high player interest and growing market competitiveness.

As observed above, the top 30 sees all games played Live, with the exception of slots. The no-frills Classic Roulette is the only title still played with a virtual random-number-generator (RNG) among the market leaders. Still, it lags behind most other roulette versions in player numbers.

Both Western and Indian-born games are preferred with a live dealer over a simple virtual layout. Mainstream popularity made casinos part of the gaming culture in India decades ago. Nowadays, players enjoy a setup that brings the spirit of a gambling hall into the palm of their hand.

The most important casino game providers and developer studios have already taken note of the above-market dynamics. Evolution Gaming, for example, publishes innovative game titles like “Dream Catcher,” already a huge hit on the desi market. It combines most of what is in-demand right now: played live and based on a simplified roulette wheel; Dream Catcher has features like multiplier and bonus segments.

Evolution’s other global hit, “Crazy Time,” is similar to the Wheel of Fortune. Again with a live dealer, its attractive visual setups engross the player and make for a more exciting take on the roulette genre. It is the most popular table game outside the classic casino genres (roulette, cards or dice), chosen by 2.44% of all players and generating 5.48% of the turnover.

It’s followed closely by the instant hit Cash or Crash which drew 1.40% of all casino players and 6.55% of the turnover in the “other” table games segment in the trimester right after its launch. In that category of games alone, Cash or Crash was responsible for 17.19% of all players in the fall of 2021!

The above findings are not unexpected for the online casino market in India, even if they reflect more recent market trends. Still, our study highlights the importance of desi traditions in real-money gaming.

Based on available primary data, Indian games like Teen Patti and Andar Bahar generate 13.5% of the turnover among the top 30. Such classics attract around 10% of the player count, maintaining a similar share in the top 100 most popular games.

Andar Bahar is ranked 4th overall by the number of players and first among Indian table games. It also attracts a large number of high-rollers, players who raise total turnovers and gaming sessions’ length considerably.

Teen Patti is also a game that always comes high among player preferences, something that isn’t a surprise considering it regularly dominates mobile app rankings.

Other online casino favorites include Chinese-origin games like Sic Bo, Dragon Tiger, and Fan-Tan, and Indian classics like Jhandi Munda and Ludo. Super Sic Bo is the third most popular live dealer table game, with 2.78% of the money bet (and the top favorite in Madhya Pradesh). Dragon Tiger attracts twice the bet amounts (1.90%) compared to its relative turnover share in the top 30 live casino games. While Jhandi Munda is the classic example of an Indian game that crossed over successfully into Western-style online casinos – it gets most of its players (45.7%) from the South: Karnataka, TN, Telangana, AP and Kerala.

Secondary data on search volumes made available by Google and app download rankings confirm the stable interest and consistent player demand that Asian games tend to generate. The cultural heritage and gaming habits of many Indian families justify such visibility.

Market leaders like online Rummy and Teen Patti have expanded their player pools largely due to mobile apps in the past decade. Teen Patti almost always occupies the leading three positions (and usually 4 out of the top 5) in casino game downloads and revenue generators. Looking to exploit that potential, many operators chose to integrate Poker and Rummy along with other desi games within the same casino game app.

Crucially, the most downloaded real-money mobile games already see four Slot apps in the top 10, and more than half of the top 20 dedicated to the same game type. Poker and Roulette follow, not far behind.

This brings our experts to conclude that Western-style casino games are slowly closing the gap in national popularity with traditional game genres like Teen Patti. Slots even had a huge spike in interest in mid-2021, surpassing most other casino products in India for a month.

Ultimately, the gradual adoption of foreign casino games has raised the bar for offshore operators, making them compete through quality and customer support rather than rely on game popularity alone.

Previous studies have highlighted the importance of social and economic development for India’s biggest gambling states and cities. We now see a similar pattern in this study, with many of the regions within the Union standing out in a particular game category.

In the top 30 by player count, for example, Delhi has the highest number of unique gamers going for slots, while Karnataka players choose the roulette (most often Lightning) and traditional desi games.

Rajasthan spikes in baccarat gaming activity in late 2021, figures show. If we extend the analytic scope to the top 100 games by player count, Telangana rates highly in Lightning and Instant Roulette sessions. Maharashtra residents also opt for various roulette versions above all.

In terms of monthly turnover volumes, Andhra Pradesh is more active than any other territory, largely due to roulette sessions. AP occupies 4 of the top 6 spots (in month-by-turnover volumes) and 9 of the top 18.

Interestingly enough, player count suggests that these numbers are fueled by a relatively limited number of high rollers, all of whom are roulette players. All high rollers play live studio versions, too.

The table below shows the favorite games by state, according to player numbers and turnovers for a particular game. 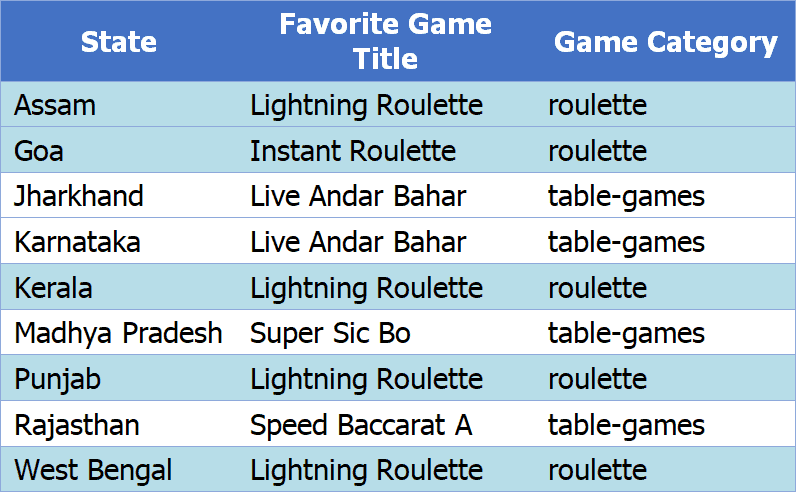 Looking beyond casino games, Telangana and Andhra Pradesh stand out among sportsbook bettors. Experts seek the rationale for this in these states’ insistence on outlawing sports betting. However, the historical background and gaming preference of local gamblers prevail and burst into online betting channels.

Delhi and Mumbai – the Home of Online Slots

The “Table Games” category includes mostly card games and Asian classics listed above. Along with online roulette, these are clearly among the leading real-money games for India’s online casino players today.

The growth rate of the other emerging game category – online slots – is attributed to the importance of states like Mumbai and Delhi, among others, as those register the biggest slot player communities across the nation. 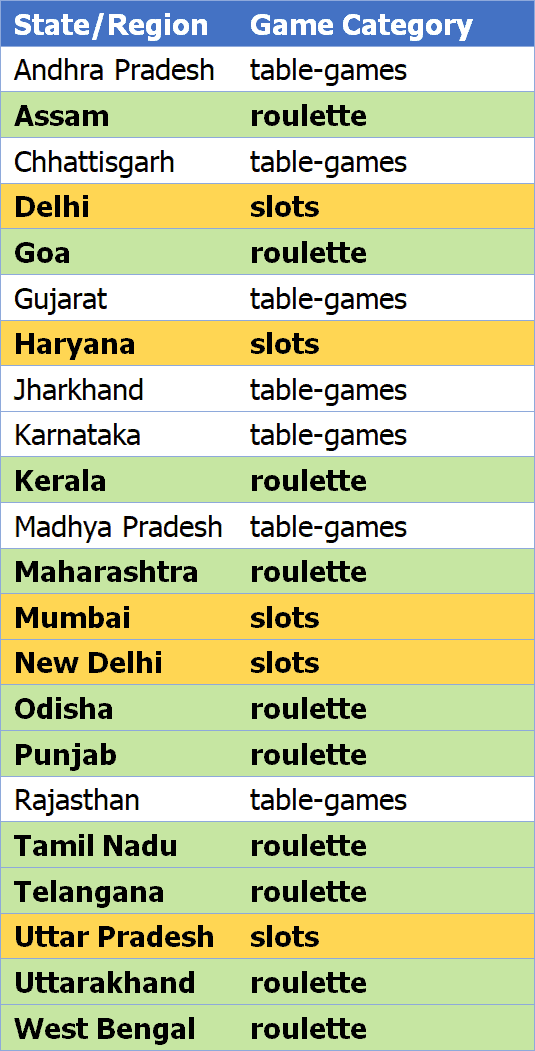 Games with the biggest turnover per player are indicated above as regional favorites throughout 2021. Metropolitan areas boost the placement of some states, particularly relevant in the case of Delhi and Mumbai as slot-player bases. Telangana confirms the locals’ passion for roulette, while Karnataka sticks with traditional desi table games.

If classified by bet count, slots are crowned as undisputed market leaders among all casino games. 10 out of the top 10 and 29 out of the strongest 30 monthly performances in a given state see slots top the gameplay bet instances.

If we dive into particular Slot-game titles, we see Uttar Pradesh take the top spot (with over 154 thousand bets on “Rise of Egypt Deluxe” in November of 2020), Gujarat dominates the top 6 in early 2021 (with “Mahjong Ways II” especially), and Karnataka fares strongly in the top 20 (with “Honey Rush”). However, separate slot games fail to make a stronger impact as player activity is spread out among more than 2300 titles, as we noted above.

Our study has revealed a couple of growing segments that were not a factor in online casinos merely a few years ago. A game breakdown at overall, monthly, and state levels sees Roulette top both player and turnover shares.

However, tts influence decreases when the study scope is widened, and more games are considered. Slots are the most notable challenger, outperforming roulette in some geographic areas, and many traditional casino games in general.

Gaming app market data shows a strong and growing demand for both mobile casino apps and standalone solutions for games ranging from Teen Patti to rummy and slots. Operators should consider delivering both desi favorites and global classics simultaneously, possibly under the same online casino app or platform.

We have seen states like Delhi and Mumbai play more slots while Telangana chooses roulette and Karnataka, preferring traditional Indian games. However, our experts clarify that the evident convergence with Western casino games evokes references to market maturity. Indian casino players continue shaping one of the most exciting global gaming markets.