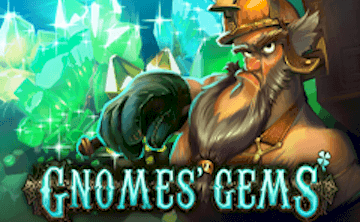 Gnomes' Gems is a colourful and fun slot machine from provider Booongo Gaming. Like the company's other video slots, this one is popular for its high production value and unique bonus features. Gnomes' Gems takes you into a mine full of treasures, and four gnome protagonists help you collect loot and earn special bonuses as you play.

This slot uses a five-reel layout – five columns and three rows. All bets are played on the game’s 20 possible paylines. Though you can’t change this, you can configure the coin size from 0.01 to 5. The minimum coins per line amount are locked in at one. Because you can only adjust the coin size, placing a bet in Gnomes’ Gems is straightforward. The game also has autoplay and accelerated/standard spin settings.

The game has a few unique symbols that change the reels to help connect more or bigger wins. Watch for these while you play:

These symbols have an immediate effect on the reels, but you get additional perks after they appear during seven spins. Once you collect seven of each symbol, you get free spins. Only one type of symbol can appear during the same spin.

Gnomes’ Gems also has wilds and scatters. The pickaxe wilds, which only appear on the first four reels, substitute for all symbols except scatters and the four bonus symbols. The lantern scatter appears on reels one, three, and five during the main game. Scatters and bonus symbols can’t appear together during the same spin.

You must complete the extra bonus game to get free spins in Gnomes’ Gems. Once you collect seven of each special symbol, you win 20 free spins. You also get 10 free spins when three scatters land on the reels. All free spins are played using the wager that triggered the feature. Because the scatters only appear in the base game and you’ll need to recollect the 28 bonus symbols to get another 20 spins, free spins don’t stack.

Gnomes’ Gems doesn’t have a progressive jackpot. The biggest payout possible is awarded when five red gems are in a payline. The game also has high-paying green and purple gems. The lowest-paying symbols are A, K, Q, J, and 10. The lantern scatters also count as a win when you get three in a payline. Gnomes’ Gems has a theoretical return to player rate of 97.1 percent.

If you like the game Gnomes Gems Slot, SevenJackpots also recommend the following games for you: