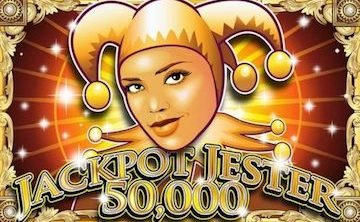 Once players accumulate enough coins in this section, they have the option to transfer them into the super game and spin the top set of reels. To do so, players must have payouts that are more than 100 coins, since the top reel spins cost 100 each. Players should consider accumulating plenty of coins to increase the chances of winning the jackpot.

Unlike other classic slots game providers, such as Siberian Storm and Wolf Run, Jackpot Jester 50,000 does not offer free spins, nor does it offer a progressive jackpot.

Similar to the traditional fruit slot machines,Jackpot Jester 50,000 features the favourites, such as cherries, lemons, melons, and plums, as well as bells and 7s. The game has five overlapping paylines. All wins go from left to right and must reside in the active paylines.

If you like the game Jackpot Jester 50,000 Slot, SevenJackpots also recommend the following games for you: